Five years ago Edgar Myer knew close to nothing about Indonesia, and didn’t really think much of it. Being a young, keen anthropology student, he jumped at the opportunity to do some fieldwork there; unaware of the effect it would have on his future. He soon found himself completely fascinated with the culture; learning the language, returning home, and without hesitation, changing his degree to law.

Upon asking Myer as to what exactly it was that intrigued him about Indonesian culture, he quickly (and rightfully so) suggested I distinguish between Indonesian culture ‘as a nation’ (or perhaps more aptly a national project) and the many different indigenous cultures within Indonesia (2015, pers. comm., 30 April). Slightly taken aback by this comment, I took a moment to consider what I myself associate with Indonesian “culture”, coming up with a shameful generalization of the death penalty, asylum seekers and vacations to Bali. It is a frightful realisation to comprehend that many Australian citizens demean our neighbouring nation, which is so intricately intertwined with our political prosperities, down to a tropical holiday destination. Not only are these associations crude and unjust but they also highlight a serious flaw in the nature of Australia’s perception of a country so truly rich in cultural diversity.

In recent months, the media has bombarded us with the topical issue of Andrew Chan’s and Myuran Sukumaran’s execution sentence, painting a very blunt picture of the corrupt Indonesian political system. However, as E. Myer (2015, pers. comm., 30 April) points out, these events speak to Indonesia’s national culture (though perhaps more so its current political climate, though the two go hand in hand), but they don’t speak to the Acehnese, the Javanese, the Balinese, the Sikkanese, etc, per se, each of whom are Indonesian, but also quite different.

In 2010, the then president of Indonesia, Susilo Bambang Yudhoyono, delivered a speech to Australian parliament addressing the strengthening relationship between the Indonesian and Australian people, but also drew upon the wavering misperceptions of the two national cultures (Parliament of Australia 2010). 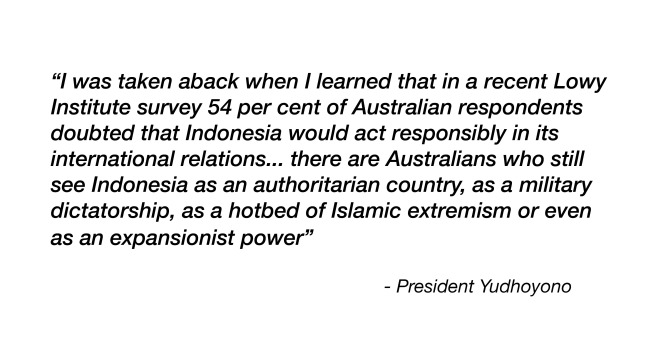 He also acknowledged the distorted views Indonesians have of Australia, highlighting that many of the people of Indonesia “still remain afflicted with Australiaphobia.” (Parliament of Australia 2010).

According to E. Myer (2015, pers. comm., 30 April), it was most likely his intention to simply acknowledge that these misperceptions do exist (and continue to exist), as he probably sought to assuage these fears by going on to say that the reality is quite different. A more recent poll conducted by the Lowy Institute for International Policy found that of the 21 countries, Australia was the fourth most warmly regarded moving from a lukewarm 51° recorded in the Institute’s 2006 Indonesia Poll to a warm 62° (Lowy Institute for International Policy 2012).

Whilst these statistics indicate a fortifying relationship between the two nations, the divide is still very much in two. Indonesians have dramatically warmed towards Australia, but take a second to ask yourself, is 62° a number you can be proud of?