The question of what design means in different contexts can be taken in two ways, both questions unveiling important ideas about design. The way in which we can view this question is; what does design (the process), and what does design (the artefact) mean in context. It is important to make this distinction as they both pertain to the use of the final design, but the stage at which the context dominates, determines use.

Recently I observed a piece of plywood between the two doors of the university workshop, acting as a doorstop. Previously this timber was a lamination of veneers, designed for use in applications needing large, flat areas of timber. The user did not design this by process, but by action. Context entered the design process late into the artefact’s life; The timber became a door stop by being placed into a context.

This was design at an improvised, consumer level, design defined as a “purpose … that exists behind an action” (Oxford Dictionary 2015). Design where a pre existing artefact’s purpose is defined by context, rather than context informing the design of the object. 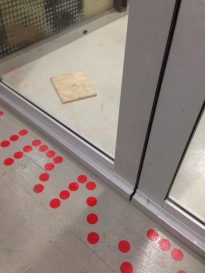 Conversely to the plywood door stop, Dutch Design studio Droog Design’s roots lie in a range of objects whose context was at the start of the products life, informing the design process. “The products were exciting … they said something about the context in which they came into being” (Ramaker 2002). Renny Ramakers, Droog cofounder cites a critique of 1990’s design as the start of Droog, an aversion to products presented under the banner of ‘Design’, and a use unconventional materials, style and construction.

Chopsticks are another example of the design process starting with context. The development of chopsticks stemmed from a combination of Confucius teaching and efficient cooking methods. 400 BC saw a scarcity of fuel for cooking, and meat was chopped into smaller pieces to cook quickly, using less fuel, negating the need to have a knife at the table. This also meshed with Confucius teaching, “The honorable and upright man keeps well away from both the slaughterhouse and the kitchen. And he allows no knives on his table.” (Confucius)