The issues of homelessness and urban waste are hugely prominent in Indonesia. (Jakarta Post 2009) They are two issues that artist Gregory Kloehn similarly identified in the urban areas of Oakland California – the multitude of trash dumped on the street and the lack of shelter for the homeless. In a community driven initiative he has created homes for the homeless out of this waste, solving two problems in one design. Design boom describes the homes as ‘a low-cost, practical and imaginative solution for the construction of habitable shelters for those living on the streets’. (Designboom 2014)

Kloehn makes a use for ‘illegally dumped trash, commercial waste and excess household items piled in alleyways and discarded throughout the city’ (Designboom 2014) in a highly constructive and ingenious way. The garbage becomes useful and even aesthetically interesting in Kloehn’s constructions, and while they are basic designs they still employ design principles of shape, colour and form in their composition. They have slanted roofs to allow rain to run off and include wheels so that they are portable and suitable for the nomadic nature of the homeless person. They also include skylights and windows in their basic, but functional design. The less ‘cutesy’ looking designs are more successful, as they in no way take the seriousness out of the situation they are addressing, however perhaps draw attention towards it. The concept of repurposing waste as opposed to simply collecting it in a different way prolongs its usefulness and encourages its use in other avenues of architecture, even starting at this small scale.

The project has garnered huge community interest, with Kolehn starting workshops to teach those interested how to build these structures. Social media has allowed people to donate money in order to fund these classes and the minor extra materials necessary for building. (Designboom 2014) This is a fully not-for-profit initiative that has garnered increasing attention and the realisation that through more and more people harbouring the skills to build the houses, both the dire situations of many homless and the level of waste dumped around the city could be improved. (Designboom 2014)

Pollution is a huge issue from villages to cities in Indonesia, (Daily Mail 2014) many homeless collect plastic and other rubbish for small amounts of money, whilst living within this urban waste on the street (Jakarta Post 2009). The idea of this waste being useful in an immediate and productive way, presents many design possibilities and is very inspirational. Projects such as Kloenhn’s not only provide solutions through design but bring people together and highlight the issues they are addressing. 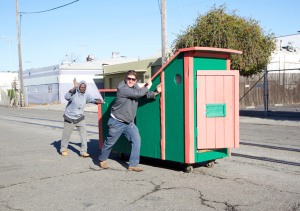