Cultural traditions are an important part of any local community. These traditions create a sense of belonging within this community as stories and historical meaning are often embedded in these traditions. The batik textile practice in Indonesia is strongly engrained in these local communities, dating back to the 1800’s. Each village has its own distinctive style of batik as the motifs used in the textiles have been passed down through generations, not dissimilar to methods of story telling used by the Aborigines through their dot painting or Guatemalans in their textile weaving.

To the untrained eye batik designs are just beautiful, colourful patterns on cloth but each designs carries it’s own significance and was once representative of social status. Many designs were reserved only for Yogyakarta royalty or the Kingdom family. Although today these designs are available for any tourist to purchase on the street it is important to understand the meaning these designs hold for the local community. One of these patterns is the Parang Rusak pattern meaning “Big Knife” which represents courage and was reserved only for the King. This design must be produced in very particular way, each line drawn in a single breath. Some people believe that this motif tells the story of creation, “others believe, this design was created by Sultan Agung of Mataram (1613-1645) after a meditation on the South coast of Java” (Rohima, 2012) and that it symbolises the power of the waves in the ocean. 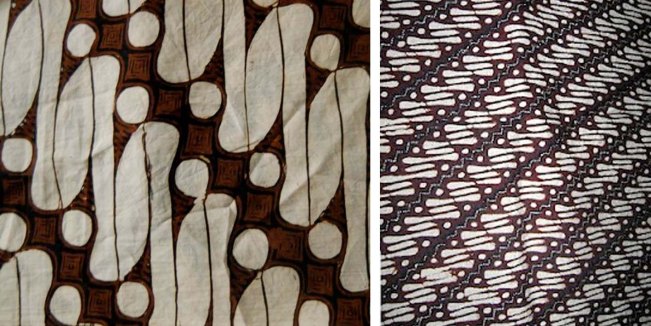 Another design that tells a beautiful story is the Sawat Pattern, which translates in Javanese to “Strike”. This motif tells the legend of the Garuda bird, a mythical creature with the body of a man and the head of and wings of an eagle who carries a Hindi God up into the heavens where the gods have the power to strike down evil. This motif demonstrates the hybrid of Hindi and Islamic Mataram religions that is present in Yogyakarta. A design such as this would have been forbidden in many of the islands of Java during the 17th century that were predominantly of Islamic faith. The ban on the depiction of humans and animals initiated a more abstract form of batik motifs, “stylised and modified ornaments as symbols, such as flowers and geometric patterns, known as ceplok. The ceplok patterns were the way in which batik makers attempted to get around the prohibition, creating simple elements which represented animals and people in a non-realistic form” (Florek, 2011).

(Sawat pattern Images from http://batik-pattern.blogspot.com.au/2012/06/batik-pattern-semen-romo-sawat-gurdo.html)
Batik motifs represent the beliefs of the Indonesian people, this is why the patterns vary between villages as people’s context and values shape the designs.