B) The city of Nagoya, Japan lies on the Nobi Plain in the centre of Japan, with a population of approximately 2.2 million. The area is composed of a diverse landscape that covers 326.45 sqkm. (Convention of Biological Diversity, Japan). The area now is almost completely urbanised with only a few remaining woodland areas which is threatening local plant species, with a further problem of foreign species. Atmospheric and water pollution have increased considerably with the industrialisation and urbanisation with an impact of climate change as another major concern.

Public Participation in Design for Sustainability Fumio Hasegawa is an economics graduate of Nagoya City University, and has been employed by the City of Nagoya since 1975 of which he is now deputy director general. Hasegawa gave a presentation at the World Economic Forum an international conference in Turin, Italy, where he illustrated the fascinating history of Nagoya from the construction of its castle 400 years ago, to the devastation of World War II and the 1959 Ise Bay Typhoon, to its remarkable turnaround in becoming a prosperous industrial city, home to Toyota, Brothers Industries and more. It is a city with a strong cultural identity and the will to change.

In 1999 Nagoya launched the “Emergency Announcement for Garbage Awareness,” a campaign to reduce waste without having to construct a new landfill on the tidal wetland of Fuji-Higata. To achieve this goal, the City of Nagoya called for public cooperation in a huge recycling operation. The target was to reduce waste by 20%. They managed to reduce it by 60%, and the preservation of the tidal wetland was ensured. The preservation of the wetland has implemented educational programs and environmental awareness. These efforts have both prolonged the usage of existing landfill sites, and enabled the preservation of the Fujimae Tidal Flats. Although the overall volume of garbage and recyclables has only reduced slightly, the city is aggressively promoting the achievement to reduce landfill waste to 20, 000 tons annually. To achieve this they are promoting (Reduce, Reuse and Recycle) among citizens.

This successful campaign has made action of a more sustainable future a priority for the city and its citizens. With the support of local Government and industries and the innovative help of the public, the city of Nagoya now provides an excellent example of a win-to-win approach, where in the face of a crisis they were able to lead toward more sustainable behaviours and social well being to provide a more promising future. 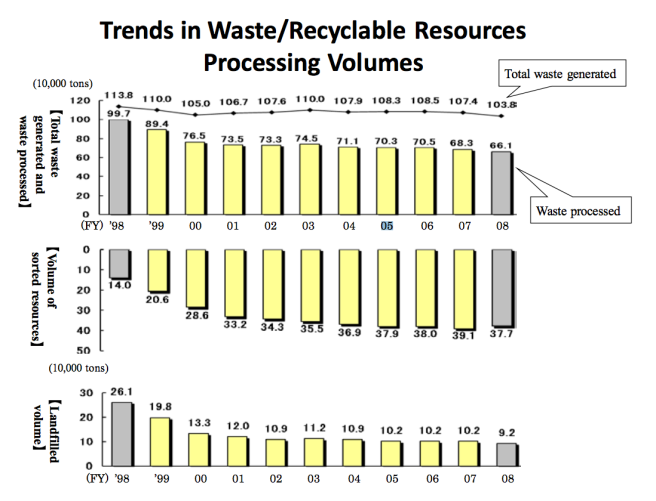 Waste reduction through citizen collaboration and conservation of the Fujimae Tidal Flat, City of Nagoya, Japan, viewed 2nd May 2015, http://www.teebweb.org/wp-content/uploads/2013/04/Waste-reduction-to-conserve-tidal-flat-Japan.pdf