Upstream is a dual product system that utilizes a modern filtering system and reusable bottle design for everyday access to clean drinking water. It was founded by a collaboration between Indonesian and Australian Students and is a not for profit organisation, working within university contexts across Indonesia. Upstream has taken a multidisciplinary approach to create a holistic design solution. 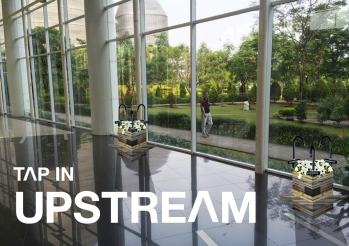 Utilizing an innovative filtration system, tap water is made easily accessible in a communal tap design so students can take their reusable bottles, or recycle old plastic bottles to fill up and remain hydrated throughout the day.

The conceptualization and creation of Upstream was a direct response to the rapid and large-scale waste production of plastic in Indonesia that we noticed throughout this trip and in conversation with the UMN students. In Design Futuring: Sustainability, Ethics and New Practice Tony Fry explains ‘We human beings live a contradiction. In our endeavor to sustain ourselves in the short term we collectively act in destructive ways towards the very things we and all other beings fundamentally depend upon’ (Fry 2009, p. 22). Having consumed 15.7 billion liters of water in 2009, Indonesia has emerged as the seventh-largest bottled market in the world. In the Asia Pacific, it is the second largest in terms of total bottled water consumption, coming second to China. Owing to the rising presence of contaminants in water and relatively low entry barriers, the Indonesian bottled water market is expected to register double-digit growth rates till 2016.

Apart from favorable economic factors, the market received a boost from the rising spending power of young urban consumers and improving health and safety awareness in the country. It is widely recognized that the large population of urban cities in Indonesia and enhanced health and water safety awareness are the key drivers of this market. Bottled water in Indonesia is a safer alternative to tap water for consumption, and the majority of the population considers it more affordable than residential water treatment equipment.

Upstream distributes and manages an infrastructure of clean water systems on university campuses. We provide pod style refillable water stations with an integrated filtration system that provides students easy, cost free access to clean tap water. Upstream also distributes compact reusable bottles constructed from recycled aluminum and plastic waste. These bottles were designed in conjunction with university students, in an effort to appeal to this demographic. Whilst further, the clean and modern aesthetic of our products establish upstream as an appealing brand for university students within the relatively untapped market of reusable drink bottles. Ultimately, the desirability and functionality of the upstream products aims to reduce single use plastic products.

Upstream is currently running a pilot program within UMN in Jakarta, with the intent to roll out across all Indonesian universities in the future. All of Upstream’s manufacturing will occur within Indonesia, as both a demonstration of Indonesia’s vast production capabilities and a means to support local economy.

Through an integrated social media campaign Upstream aims to engage with a wider audience as well as create a fun, engaged and rewarding experience with its users. The Upstream app utilizes a point system that rewards a user for refilling their Upstream bottle. This engagement of the user with the Upstream social media will assist in creating a movement where clean tap water is more readily used within Indonesia. The apps invitation system allows Upstream to remain situated within a university context while still engaging a wider Indonesian community to further build awareness and facilitate change. 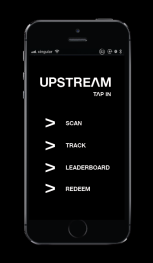 Through Upstream’s extensive research programs, it has been highlighted that Indonesia’s plastic waste is the second largest contributor globally. At the forefront of this is Danone Aqua, having held the monopoly on Indonesia’s clean water supply for 42 years it continues to control 60% of the clean water market. Upstream provides smaller communities with the power to control their own clean water supply and bypass the larger cooperation’s that permeate Indonesia’s deteriorating waste landscape.

As a not for profit organisation, upstream has designed its infrastructure to have specific advertising opportunities, allowing universities to implement their own branding within the products as a form of marketing strategy. This allows upstream to align with the shift towards running eco-orientated marketing campaigns. Upstream therefore provides universities with a project that is a part of their marketing campaign. This allows upstream to draw upon the pre-existing marketing budgets as a financial facilitator for the company.