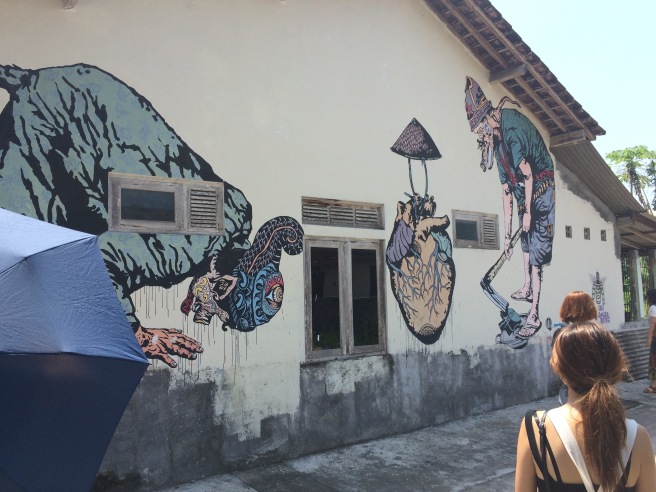 For thousands of years art has existed in many different forms and spaces. In the last few decades’ street art has become an integral part of the art world. Often laced with a political or social message; empty walls, streets, public spaces and urban environments have become a large and powerful place for artists to leave their mark. Contemporary public art and street art (sculpture, murals, woodcuts) first started appearing across Yogyakarta during the late 1990’s at the hands of low-key of artist groups. In the early 2000’s graffiti and street art rose to prominence as lots of young creatives began to see it’s potential.

Andres Busrianto (Anagard) is an Indonesian artist who I had the pleasure of meeting on a university trip to Yogyakarta. Busrianto spent his school years drawing and painting, his passion eventually led him on to study fine arts (majoring in painting) at Institute of Art Indonesia in Yogyakarta. In recent years he has found a love for street art choosing to working with detailed stencils.

He draws a great deal of his inspiration from the notion of human existence, his family, friends and social settings. At the heart of his beliefs is egalitarianism, a political philosophy that favours equality: People should get the same, or be treated the same, or be treated as equals, in some respect (Arneson 2002). This can be seen through the imagery in his pieces, which are a “weapon” for protesting against the injustices and corruption caused by the Indonesian government. He hopes that his art can encourage people to look at the world with an open mind and unite communities.

Andres has a strong relationship with Geneng, the village he currently resides in just outside Yogyakarta. A humanitarian at heart, Andres was one of the first people to volunteer to help rebuild the village after a devasting earthquake hit the region in 2006. The Geneng Street Art Project (GSAP) is the “crazy” lovechild of Busrianto and his artist group called Ruang kelas SD. The GSAP is the main annual event on the group’s calendar. The idea to fill the bare walls of Geneng with murals started in 2013 when he joined a free street art tour in Berlin and contributed to street art festivals in Lithuania and Poland. Busrianto believes that GSAP is a way that he can continue contributing to the local community by bringing tourism and providing education.

The most interesting part of this project is that the murals are painted on the side of resident’s houses. He negotiates with village members remaining sensitive to culture, customs and religion. Despite doing his best to mediate with the village, Andres has had clashes with locals about what is put on the walls, having to remove what he has done or change the design slightly. Using social media and the Internet he finds and invites local and international artists to contribute to the GSAP each year.

Andres says that art in a gallery is by far the best art but it is often inaccessible in a country like Indonesia. Street art is public art that everyone can connect with, often reflecting the views of the general public. There is something slightly rebellious, which allows it to transcend international cultural differences and unite people who may not have been able to express their thoughts otherwise. He is keen to show the rest of Indonesia and the world the importance of public street art. Looking to the future he wants he wants to document the evolution of the project and turn it into a beautiful coffee table book.

Notes from interview with Andres Busrianto

*All images taken by myself or with permission from Andres’ Instagram*