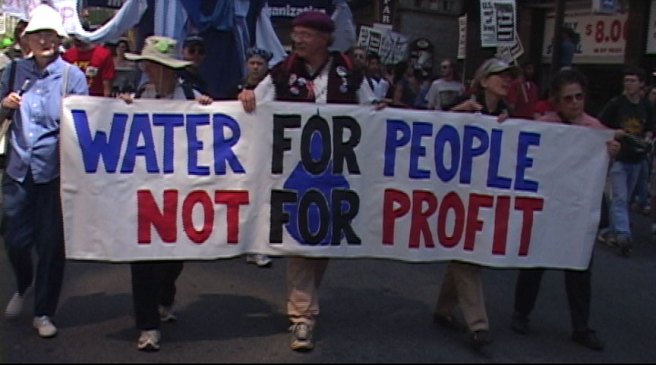 According to “Asia Times” reported that the World Bank and IMF (International Monetary Fund) to pressure to Indonesia, but accelerate the privatization of state-owned enterprises, increase to attract more foreign investment, and it can recover from the financial storm. Indonesia in accordance with the two big international institutions “prescription”, take the lead to low efficiency of water service, market-oriented reform. However after water conservancy to the private enterprises operating in Jakarta in 1997, surprising prices will continue increase that the poor can’t afford to use water more and more.

Jakarta’s privatization scheme of water supply is a former President Suharto of administration. Britain’s “Thames water group” “Suez of France and two foreign water company has monopoly Jakarta water service for 10 years, they did not reduce the water crisis, only makes it worse. The two companies have also sold their shares in the water supply company in Indonesia. As early as 1994, the world bank warned that given the water speed is far behind the pace of pumping speed of the aquifers, groundwater in Jakarta will be difficult to meet the demand of industrial and domestic long-term water in Jakarta. In recent years, the rapid development of real estate industry has occupied a large number of green spaces in Jakarta, many in the water basin of paddy fields, lakes and natural habitats have been destroyed. Covers an area of 661 square kilometers of Jakarta, located in west Java province along the northern coast of alluvial lowland, and at least 13 rivers, over 2000 millimeters of annual rainfall, 78 flood threat. Unfortunately, due to the lack of direct rainfall of crevices or city to stay on the surface, the precipitation is not meet with groundwater. In the face of failure water privatization reform, government officials are thinking way to mend. The government has asked the industry recycling water for industry and commerce, in order to improve water use efficiency.

Indonesia’s national charter says that belong to the state of water resources, for the people. But in 1999, the world bank provided a huge rescue loan to Indonesia, including a regulation legislation in Jakarta to speed up the water supply industry privatization of a $300 million loan, the claim that water for the people all of the charter. In 2004, Indonesia announced the implementation of the water act.