I’ve always found the East, Asian cultures, and the way in which their societies operate fascinating because culturally, they appear to be on the other end of the spectrum from the West. Even more so, I am intrigued by expats from the West who choose to live and work in Asia and their experiences in doing so. After my own travels to Indonesia, I decided to interview my good friend James Kent, an Australian who has studied in Indonesia, is now living in Sumatra and is fluent in Bahasa. Like most Australians who choose to learn Bahasa, he had the opportunity to study the language in high school, and believed that learning the language of Australia’s closest neighbour was the most pragmatic option for his future career endeavours. He studied International relations and politics at university, in the past worked for the Australian Federal Government and is currently working as translator for a rainforest conservation group in Sumatra. He is very engaged with political scenes in both Indonesia and Australia. I started by asking him what he thinks the biggest issues Indonesia faces, which he states are corruption, poverty, minority rights and the environment. Furthermore he noted certain events such as the Sidoarjo mud flow problem, poaching, fires and deforestation, and pollution.

A picture of a group working to preserve forested land, sourced from Sumatra Rainforest Institute’s website

I proceeded to ask him about his work in politics and how people in Australia and Indonesia regard important issues like the environment and the government. According to him, Indonesians are politically engaged but do not like to admit it. Recently, James was tasked with interviewing villagers in Sumatra about their opinions and attitudes towards certain issues, but found it difficult to know what they really thought due to cultural notions around politeness. The preference for Indonesians not to rock the boat in conversation, is something that goes beyond interactions with friends. Both James and I discussed potential political ramifications as a result; governing bodies lack substance and integrity when it comes to addressing issues and that corruption goes largely unnoticed. 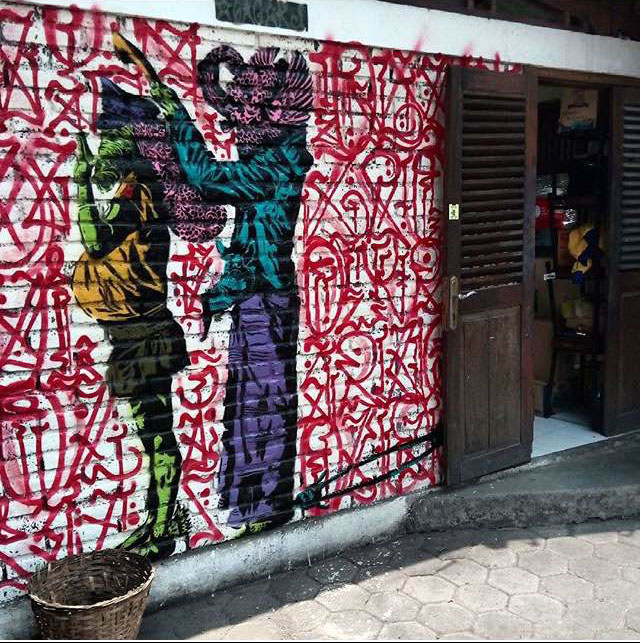 Above image is originally sourced while on a street art tour. Below is an image screen from Busrianto’s Instagram

Keeping in mind designerly solutions to issues such as these, I asked him whether he saw art or design having a role to play in social change. However, contrary to what I thought, using art and design as an outlet for cultural and political discourse is still very much taboo in Indonesia. Art is tangible, more flagrant and lingers around much longer than spoken word, proving to be more effective in triggering social changes. I imagined valiant street artists like Andres Busrianto. With complicit politicians and social restrictions in Indonesia, it is easy to see why many Indonesians just appear to accept their fate despite what they may think. Though it is this very fact when looking at the protests that occurred in the 1980’s in Jogyakarta that art is a powerful means of protest because in its very essence, it is freedom of expression (Inside Indonesia 2016). Both the medium and the content of what is on display is enough of a reason for a government to fear the messages of what it brings.