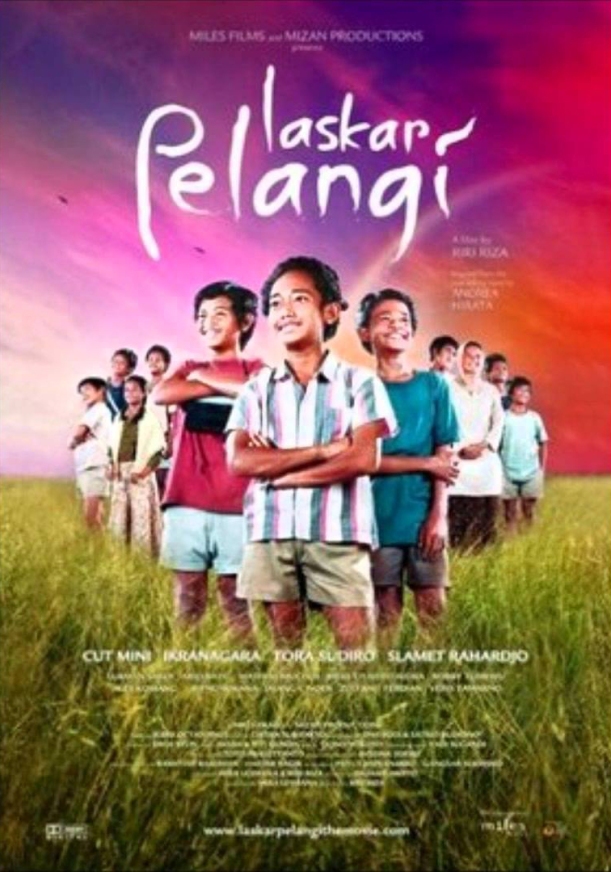 Laskar Pelangi (The Rainbow Troops) is a Indonesian film adapted from the same titled novel by Andrea Hirata.  The movie based on author’s childhood memories addresses the friendship and dream through an education.The novel has been placed as the best seller with selling 15 million five million copies since published in 2005 Indonesia.The novel  was adapted into a film in 2008 by directors Riri Riza.  The film became the biggest box office hit and the most viewed film of all time in Indonesia. The film made not only the leading actor children famous but also was adapted as musicals by reason of film’s box office hit. Since then Sang Pemimipi(Dreamer) written as the sequel of The Rainbow Troops was adapted a film as well. 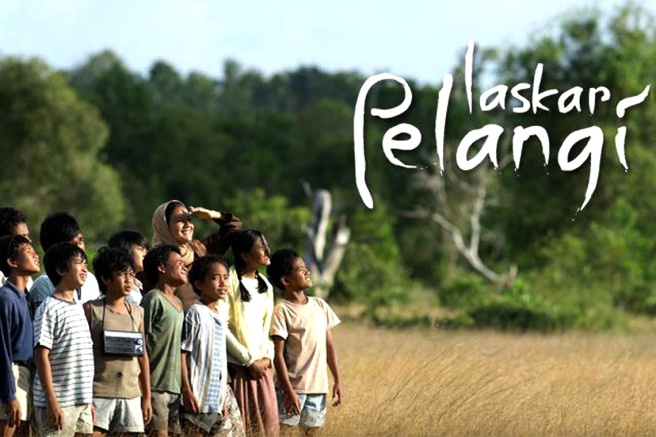 The film focuses on describing difficulty of the education environment in 1970 and was very touching especially the passion on the education. It  is a beautiful movie with laughs and warm, touching moment with 10 children divested of their right of leaning under the name of  poverty and  their teachers who want give an opportunities through the education. Belitung island that was one of the richest island in Indonesia has changed the poor island after the factories are closed. Since Belitung island become poor economically, also their education institutions for Muslims suffers heavily. Belitung island a abundant   place that have natural resources such as tin, most of natives are just poor labors of company PN Timah that digs thin on the island. People who represents PN Timah company and their children enjoy the high quality of educational opportunities and luxury life. They lives a private place by the high fence that splits from outside where most of labors lives in.

Even though the children appears that education is an  extravagant indulgence in their  in poor surroundings, their teachers do their best and children dreams future like beautiful rainbow.  Islamic primary school Muhamadia goes through hardships, since the district school board had already declared that their little school must close if they do not make 10 students minimum.

Sometime children go to the market to earn money with not being in school or leave to a farm. Big and small accidents, accurred in succession have not stopped. Their young female teacher fight against its hard situation to keep their children and school. Meanwhile the children grow up together.  It  is a very touching story that gives a messege to us that the poverty cant take a way the opportunities of passion towards learing. 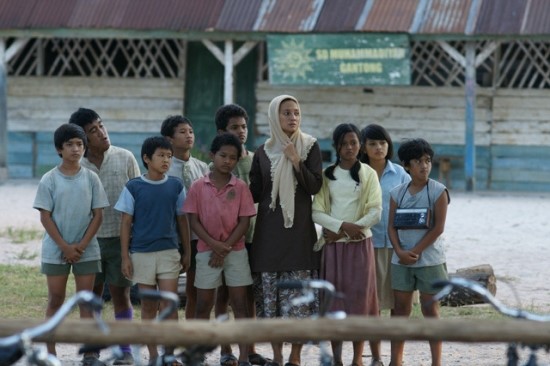 Fortunately, ten students (most of them are poor laborers’ children) do sign up, Ikal who likes badminton and writing, Lintang, a fisherman’s son who turns out to be a genius, artist Mahar, sahara who want to be a female human right activist, harun who likes number3, hansome boy tripini who most like his mother. Shahdan who dreams a stage actor, kukai who want to be a politician, muscular boy Samson who want make strong body, kiong a farmer’s son and lastly one more student floi who came from rich school.

The film captures like these kind of social change and the struggles of marginalized people  to achieve their dreams, friendship and passion against the background of what was once one of Indonesia’s richest island.Through the film we can see very beautiful place in Indonesia. Below image is the place named Rainbow Troops.

When it is raining, children always  go up on the tree go to watch rainbow.Because of this behavior, their teacher makes their nick name “Rainbow Troops” which means representing their most beautiful days. I think , we can share and feel the purity from children regardless of border’s countries. The OST Laskar Pelangi that children sings by themselves is a one of attractive point of the film. It was a movie likes its title rainbow with those beautiful music and gorgeous landscape in Indonesia.