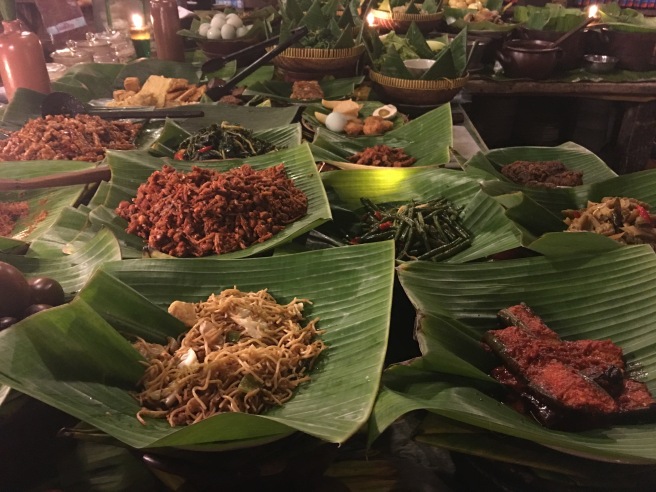 Indonesia food is one of a kind. Indonesia cuisine is mainly inspired by India Hindu food, which you can see different sauce’s in curry. At the same time, they also had their own developed food, which is based on their environment and agriculture. Such as Nasi Goreng (friend rice), Pisang Goreng (Fried banana cakes) and Teh Halia (ginger tea).

The Nasi Goreng is everywhere in Yogyakarta, and very famous there as well. Indonesia is one of the biggest countries of producing rice. And rice is the country’s staple food (Food By Country).Indonesia has multi-cooking ways to the rice.And they will place the rice into a bowl shape, put different types of meats, sources and vegetables around it. Some restaurants will lay big banana or bamboo leaves underneath.

The local people are used to eat by hand. They use thumb to mix the source with rice. That’s why the rice in Indonesia is a bit hard and can separate easily. (Anderson, S. 1995) However, in the restaurant, they will offer a spoon and folk, but no knife.

Another interesting aspect of the food in Indonesia is the side dishes called a savoury snack, which are deep fried crackers made from starch and other ingredients that serve as flavouring. For Indonesians, whether you are rich or poor, they have a habit to eat the savoury cracker, which comes in different shapes even different colors.“Such as light red, orange, yellow, baby blue, light green and white” in round, square or free style shapes (Wiroreno, W. 2016). Kerupuk is a big one, which can also enjoyed on its own or as a snack. The local people would like to eat with different source such as chill because the kerupuk has no taste (Wiroreno, W. 2016).

For the drinks, Teh Halia (hot ginger tea with Ambon) is a representative Indonesia drinks. The country’s soil and climate support sugar cane as the largest agricultural and commercial crop (Food By Country). Therefore, the drinks there are very sweet and full of sugar. Interestingly, you can see lot of ants on the table because of the sugar.

Indonesia ‘s food culture is various because it has influenced by different foreigner cultures. There are still more to explore about the food and eat habits.