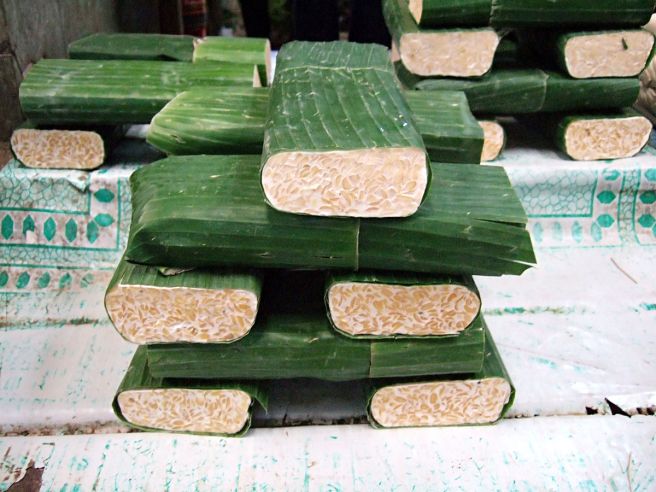 The UTS Lab B trip to Yogyakarta was a time of many new experiences for me. My first time in Asia. My first time in Indonesia. And my first experience of the wonderful local delicacy tempe. After this pivotal culinary experience, I decided to research the humble Indonesian staple and establish it’s history and origins.

Tempeh or tempe is a traditional soy product created through a process of fermentation and culturing which causes the soybean to congeal and set into a kind of cake. Tempe differs from tofu in that it does not originate from China, but rather from Indonesia (most likely on the island of Java). The earliest known reference to the soybean staple appears in the Serat Centhini, in 1815, but tempeh could have emerged as early as the 17th century as a byproduct of the Chinese tofu industry in Indonesia. Ong Hok Ham, a Chinese-Indonesian historian – proposes that early, primitive forms of tempeh were the product of excess soybeans from the tofu industry that grew pale fungi and were discovered to be edible (Ubud Food Festival, 2017). Some claim that tempe is in ‘an adaptation of tofu to the tropical climate of Indonesia’ (Diversity of Nature and Culture 2014). Though tofu and tempe are both whole soybean products they also differ in texture, flavor and nutritional value. Tempe has a firmer texture and an earthier flavor, and has higher dietary fiber and protein. Close second to meat and fish, soy (and by extension tempe) is one of Indonesia’s main sources of protein. Perhaps this is why it is known as ‘Javanese meat.’ 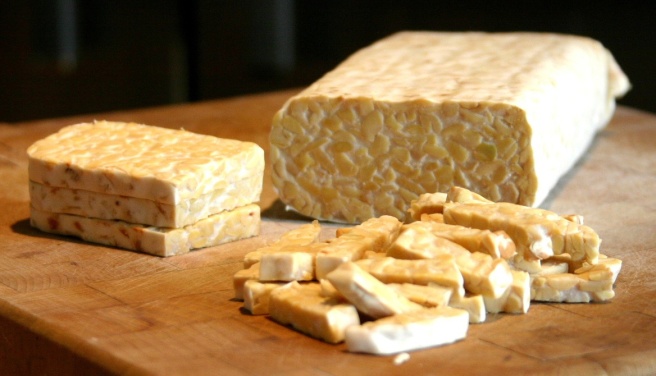 Tempe ‘has it’s own place in the heart of every Indonesian’ and is eaten by itself or as a complementary side dish to meals that feature chicken, meat or fish (Diversity of Nature and Culture 2014). Often marinated in various different spices or herbs it’s relatively cheap but highly nutritious nature has made it an intrinsic part of the Indonesia culinary landscape. It is also popular in Japan, Europe and America.

Despite tempe’s status as an Indonesian, indigenous superfood, a dominant meal that ‘characterises  Indonesia, just as kimchi does for Korea or miso and nato does for Japan’ (Ubud Food Festival, 2017) as much as 70% of Indonesia’s soybeans are imported. Producing tempe locally is still problematic because of environmental concerns surrounding tempe production. Production requires plenty of water and energy, and these waste products are often disposed of in rivers or sewage which pollutes the environment. As an affordable and nutritious food staple, many Indonesians are pushing for strategic government investment into the development of a strong tempe production network – especially given concerns about food security with the Southeast Asia region. Ever since the 2007 Indonesia riots and protests in response to a food crisis which saw the cost of staples such as rice and soybeans spike dramatically, Indonesian policymakers have endeavored to ensure all citizens have access to healthy and affordable food (Inside Indonesia,  2013). Perhaps tempe could be the answer to these problems. As Professor Winarno notes, ‘Tempe holds a variety of developmental possibilities not only in the culinary field but also in the fields of medicine, the agricultural industry, and bioprocessing. Tempe is Indonesia’s unique treasure” (Ubud Food Festival, 2017).