COLOGNE, GERMANY. 1939 — scientist Franz Müller presents the first epidemiological study linking tobacco use and cancer. Five years later, German scientists Eberhard Schairer and Erich Schöniger at Jena University confirmed this study — convincingly establishing for the first time that cigarette smoking is a direct cause of lung cancer. These findings became the basis for the “first and most broadly-reaching anti-smoking campaign of modern times.” (Hamilton, 2014).

Smoking was discouraged in the workplace, banned in cinemas, and also in schools. Policemen and servicemen could not smoke in uniform, and it was not permitted to sell women cigarettes in cafes and other public places. As well as this, advertising tobacco products was restricted. According to Proctor (2000), “Nazi officials moved aggressively in an all-out campaign against cigarette smoking in which tobacco was proclaimed ‘an enemy of the people,’”. The scope of this can be seen in many of the posters and slogans produced for the campaign, the anti-tobacco journal Reine Luft (Pure Air), for instance, used puns and propaganda to suggest smoking was promoted by the devil (Weindling 1989). 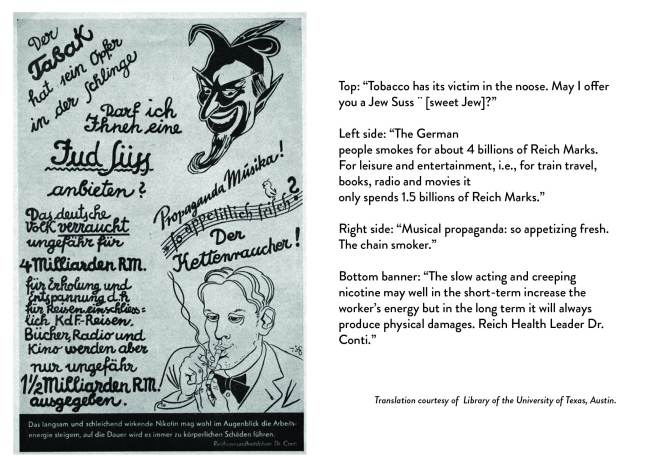 This tobacco control approach can be seen as a top-down method, in which the totalitarian National Socialists enforced what they saw as an issue in the best interest of the people. Research into the effects of tobacco were funded by the Institute for the Struggle Against Tobacco, which was founded in 1941 and funded by Hitler’s Reich Chancellery (Hamilton 2014). The campaign can be seen as an interdisciplinary initiative that compounded anti-capitalist propaganda, public health research, and quite often — anti-Semitism. It’s enforcement however, was reportedly inconsistent, where “measures were often not enforced, and cigarettes were actively distributed to ‘deserving’ groups” (Bachinger et al 2009). Later statistics suggest that despite the volume of the lasting effects of the initiative prevented approximately 20,000 German women from lung cancer deaths due to Nazi paternalism, which discouraged women from smoking, often with police force (Proctor 2000).

The Institute for the Struggle Against Tobacco was shut down after the second world war. A decade later, the American Cancer society published findings confirming the link between lung cancer and smoking; as well as the risk of second-hand smoke. Though enterprising, Aboul-Enein (2012) reminds us that these aggressive campaigns were “less concerned with the universal dimensions of public health practices and ethics than they were towards a pursuit of a lifestyle that was worthy of a ‘master race.’”

Aboul-Enein, B. 2012, ‘The Anti-tobacco Movement of Nazi Germany: A Historiographical Re-Examination’, Global Journal of Health Education and Promotion, vol. 15.