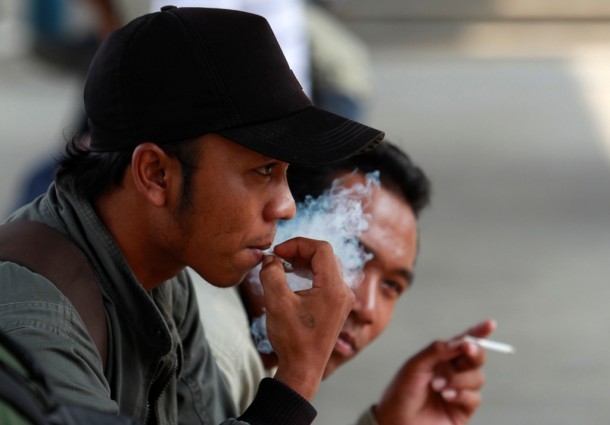 The smoking epidemic in Indonesia is one of the world’s most serious cases, with 70% of men aged over 20 being smokers and the average starting age of smoking being a mere 7 years (Hodal 2012). The leading cause of this problem is the lack of restrictive laws regarding access to cigarettes in the country, as anyone of any age is legally able to purchase and smoke tobacco. A country that completely juxtaposes this in regards to their strict anti-tobacco laws is Uruguay, who have seen a clear decrease in the number of smokers between 2005 and 2011 with the main reason being their tobacco control campaign which included the ban of cigarettes in indoor public spaces, the ban of tobacco advertisements and increasing the tax on the product (Azevedo e Silva 2012).

A design measure that accompanied these legal actions is an anti-tobacco installation set up by Uruguay’s Resources National Fund in the city of Montevideo. The installation consists of large scale sculptures of cigarettes labelled with the toxic ingredients that are used to make them and are located in a busy area where people are bound to walk past and notice them. The size of the cigarettes being close to the height of a human provides an intimidating quality and combined with the excessive number of them scattered in a highly concentrated area, makes them impossible to miss and provokes viewers, particularly those who are smokers, into considering the message behind them. 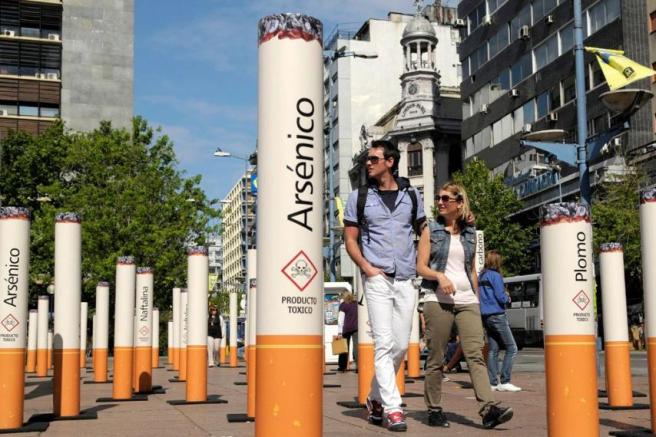 This installation focuses on the psychological aspect of tobacco addiction and serves its purpose to make smokers aware of harmful toxins they intake which are concealed within cigarettes. It tackles the main issue of smokers become desensitised to the consequences of smoking the more they do it as the ‘brain processes enhance the reward value of substances over to the point that automatic addictive behaviours occur without thinking’ (Gifford 2007). The large scale sculptural installation being situated in a population dense area effectively is able to explicitly deliver its message to people who pass by and make them accustomed to a negative perception towards tobacco.

The legal measures taken by the Uruguayan government to campaign against cigarette use has undeniably led to results as studies show that the level of restrictions placed on tobacco within an area will result in a decrease in cigarette consumption of similar magnitude (Brown 1995). However, for society to function harmoniously after government action, it requires their understanding and consent for the change and this installation is an example of a measure taken to influence people’s mindsets regarding tobacco usage by exposing its harmful nature.

2 thoughts on “Post B: Effective measures to fight against tobacco consumption”