Our collaboration with Vital Strategies and the local government of Banjarmasin placed an important emphasis on the fight against tobacco as one fought against policy, industry, and public education, rather than individual smokers themselves.

On my flight from Surabaya to Kuala Lumpur, I sat beside Reza Ariz, a 41-year-old Bandung-born office-worker, now relocated to Kuala Lumpur. Reza was visiting Java for a friends’ wedding and a short trip to Ijen. After hearing a bit about our Banjarmasin projects, he recounts the wedding reception, its platters of food, drink, and among them — a small cup filled with complimentary cigarettes. He pulls out his phone to show me a photograph of the hilarious spread, and tells me how when confronted, the groom shrugs it off as something his parents insisted was customary. 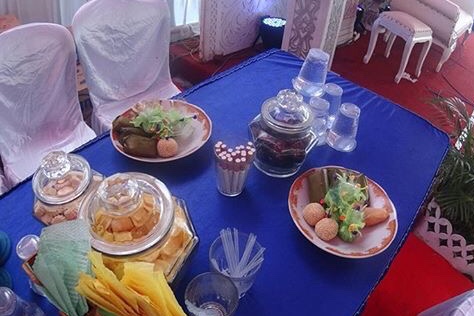 Cigarettes at the wedding reception (Ariz, 2018)

Reza himself was once a smoker. He tells me about how — typical of many young Indonesian males — he and his school friends began smoking socially at around age 14 and 15 (Ng et al, 2007).  From a pack-a-day habit, he tells me his addiction changed dramatically after relocating to KL, where the average annual consumption of tobacco is 583.67 cigarettes per person, a great deal less than Indonesia’s 1322.3 (The Tobacco Atlas, 2014). Reza tells me the most influential factors to his smoking habits came from changes in social circles, and office environments. He tells me quitting his habit has helped him discover running, hiking, and he’s now encouraging his father and brothers to follow suit.

We reflected on both our visits to Ijen crater, and Reza tells me that as he wheezed up the mountain, he saw miners carrying 90kg of sulphur up the rocky cliff, with cigarettes in top pocket, eager to join their friends for a break. It reaffirmed many of the observations we made on our first day mapping in Banjarmasin, where the prevalence of tobacco consumption, and few bans on smoking in public and indoor spaces mean cigarettes seem a concurrent facet of everyday life, rather than something consumed on a designated ‘smoko’ break — a new phrase that brought great delight to Reza.

Reza’s experiences present a very real, lived perspective to a conversation previously revolved around faceless industry and dense policy. It highlights the unique ways smoking culture affects us both at home, and the places we migrate to, and brings to light the positive impacts anti-tobacco changes can make to the lives of people like Reza.