Back in high school, one day in English, my class was abnormally restless. Being a public school (and holding little respect for the staff), one bright eyed boy decided to push his chair out of the first floor window whilst the teacher’s back was turned. When she failed to notice, the rest of the class quickly caught on. Whenever she was preoccupied, we would pass along our chairs until they reached the desk of the Ringleader. He would then send it to the gathering mound in the garden below. A few minutes after adding the final chair to our contemporary artwork, the poor teacher noticed the lack of seating first beneath Peter, in the front row, and then quickly the rest of the room too. After muttering an impassioned expletive, she sighed, rolled her eyes, and wandered from the room. It might be poetic to insist, ‘Never to return!’, but, of course, she was back a few minutes later with the vice-principle (under whose interrogation I’m proud to say nobody cracked–the identity of the creative, yet ill-disciplined, boy by the window remained safe. That is until they made the connection between his geography and the significant pile of evidence beneath his window).

But what has this to do with design? Well, tenuous though the connection may be, I believe we, as designers, should be more like Window Boy. No matter the background work, no matter the complexity of our design, it should be intuitive for our audience. That is to say, the user should be oblivious to much of our good design (though if the quality of design were less they might notice, and criticise, immediately). We want our audience as content and unconcerned as my teacher that day, before she noticed our classroom’s newfound minimalism.

Taking a step back, design in the global culture, along with many other industries, is centred around individualism; the objective of discreet design to offer products and services which bolster the individual, offering them greater freedom and comfort [Huntington 1996]. As the intent of so much design in this cultural context, Individualism begins to seem integral to design. Yet when compared with more local contexts, this deception falls away. Indeed, this comparison between contexts requires that the subjectivities in values be discarded in order to discern similarity. The likeness left standing is the measure of good design. 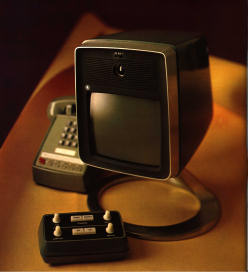 One such likeness, and the example we’ve been discussing, discreetness. In the global cultural context, the success of Apple operating systems stemmed from their philosophies of ’empathy’, ‘focus’ and ‘impute’, inspiring minimalist products of high quality which were not only easy, but intuitive to use [Levy 2000]. Or the AT&T Picturephone of 1970; users were put off by the complexity of use and the product was pulled from the market after only three years [Computer Design Solutions 2006]. The ‘discreetness’ applied (or not) in these designs seem characteristic of the global individualistic culture, yet it is not exclusive to it.

In a local context, the Boomerang, designed tens of thousands of years ago, demonstrates early application of ergonomics [Hess 1975], an example of discreetness in design from a culture utterly disparate from the one in which the Macbook Air was conceived. Similarly, in Jakarta in the 1980’s traffic congestion was increasing, but road closures and expansions would create too great an interference to be viable for the developing city. As a solution, Tjokorda Raka Sukawati designed a road development method (Sosrobahu) which allowed flyovers to be constructed with minimal disruption to existing roadways [Construction Asia Online 2017]. Rather than a simple user interface or a comfortable grip, Sukawati achieved discreetness by lessening the impact of development on his city.

Culture may affect the execution of our design, and the philosophies motivating it, but it does not altogether revise the characteristics of quality design. A textile may differ drastically across cultures, or the need for a particular product, yet as we seek to design empathetically for our stakeholders, we apply universal processes which better connect us with those we seek to serve.

So we need not discard all of our knowledge and experience in order to design for a new context. We (and here’s the kicker) can draw to mind the wisdom of Window Boy (in order to recall the value discreet design) without (necessarily) neglecting those for which we design! Regardless, I, for one, will sleep easier knowing that design everywhere is inspiring the sweet innocence of an oblivious year eleven English teacher.

Levy, S. 2000, Insanely Great: The Life and Times of MacIntosh, the Computer That Changed Everything, Penguin USA, New York.