Tobacco smoking kills an estimated 129,000 Japanese in Japan every year based on 2007 data, and more than half of them die because of second-hand tobacco smoke (FCTC 2018).  Additionally, there are significant different in the life expectancy between the smoker and non-smoker elder people, whether men or women (see figure 1). As the numbers keep dropping, this concern carries a big attention to the WHO FCTC and the Japanese Governor to make sure that Japan will improve the health populations in the future. 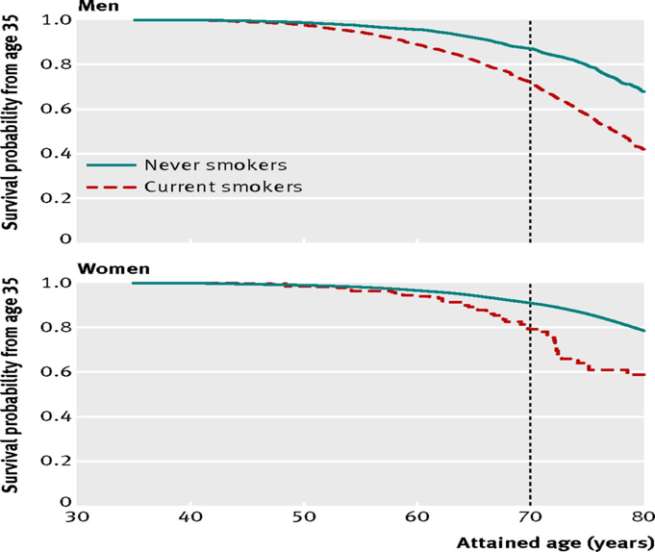 Japan’s health policies relating to tobacco are vague and minimal. Furthermore, Japanese law does unclear motive whether they are committed to ban smoking in public area. One of the Japanese tobacco law in The Health Promotion Act stated, ‘Article 25 of the Health Promotion Act is non-binding and asks managers of certain enumerated public places, and “other facilities used by numerous people” to “try to take whatever steps are necessary to prevent passive smoking exposure” (The Health Promotion Act 2002, s. 103).’ Additionally, in a review site about Japanese tobacco control law also stated that, ‘At the national level, the language of the laws are not obligatory in nature and do not require managers or employers to ban or restrict smoking in workplaces, but rather “to endeavor” or “to try” to take measures “as necessary” (Tobaccocontrollaws.org, 2018).’ Thus, these two statement showing that Japanese tobacco laws does not align with the FCTC Art. 8 Guidelines that indicate certain places in Japan to be smoke-free (Guidelines on Protection from Exposure to Tobacco Smoke 2007).

There is no other way for Japan but to take slow step by step as the Japanese learn to change for their own health benefits. Starting from Tokyo, Japan Governor, Yoichi Masuzoe, was in an uproar to achieve his goal of smoke-free Tokyo that plan to be held before the Olympic games in 2020 (FCTC 2018); also a starter to accomplish Japan Art.8 of the Convention to World Health Organization Framework Convention on Tobacco Control (WHO FCTC). The announcement came out of the country and brought people from outside to use this opportunity to support Japan. Phillip Morris, the British American Tobacco company is collaborated with Japan Tobacco company to raise up the smokeless heated-tobacco device, named IQOS (Phillip Morris International n.d.). With certain temperatures settings, the device will not burn the cigarette but heat them to avoid the release of smoke; instead a nicotine containing vapor will release. IQOS has been released in Japan not long after the smoke-free statement in 2014.

However, there is always a negative and unsolved problem after seemingly to be solved. The device is a ‘safer’ smoking device, means it will just slow down the risk of tobacco related diseased and not completely solved it. And while the use of the device is very expansive, more people are still going with the old way. A lot of remaining things that has to be carried by Japan government, like the health warnings on tobacco packaging and advertising who had been a struggle for them to overcome with the tobacco companies and relevant departments of government (The Japan Times 2017, para. 5).