Sweden has the lowest level of tobacco related mortality for men, and the third lowest overall in the EU (Shapiro 2018, 50) with 5 and 11% respectively of men and women smoking. This makes Sweden unusual; it’s one of the only countries in the world where women smoke more, and this trend has been widely attributed to the rise in popularity of Snus amongst men.

After dropping to its lowest consumption levels in 1967, Swedish moist snuff or Snus as it is referred to in Sweden, has been more popular with male nicotine users than traditional cigarettes since 1996. Made of dried ground tobacco, salt, water and  flavourings, it’s an oral product placed between the gum and upper lip.

Multiple sources cite increases in advertising in the 1960’s onwards, but primarily the development of new pasteurised products by the country’s primary Snus manufacturer Swedish Match (IARC 2007, chapter 1.1.2; Shapiro 2018, p. 48). This new process meant the product was air dried and free of chemicals similar products on the market had, and it proved an effective selling point to a market that was increasingly aware of the effects of smoking on the human body (Henningfield 2001).

Gender disparity suggests social and cultural factors were also at play, with male oriented marketing efforts and other societal notions influencing behaviours, a trend that also tends to ring true for cigarette smoking (WHO 2010). 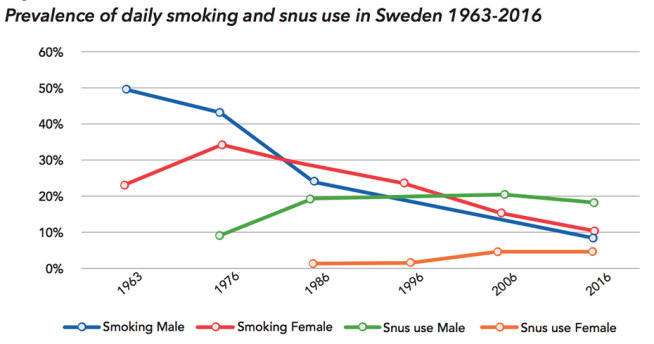 Nowadays, Swedish Match like many of its competitors openly represents it’s products as a harm reduction strategy (2018) targeting smokers who would like to quit. Studies on effective quitting methods tend to suggest that the use of Snus is in fact more effective than other products such as nicotine chewing gum and patches (Lund, McNeill & Scheffels 2010).

The above commercials from tobacco company Camel aired in 2011 and promoted Snus as a healthier alternative to cigarettes in the lead up to the government sponsored Great American Smokeout. While it might be less harmful overall, various studies including one facilitated by the International Agency for research on Cancer in 2007 conclude that Snus is still a group 1 carcinogen capable of causing oral, oesophageal and pancreatic cancers (IARC, chapter 5.5).

Whether Snus and other smokeless products are effective harm reduction strategies is a debated topic. Governments are reluctant to endorse these products due to commercial interests a company has in transferring nicotine addiction instead of allowing cessation to occur (Henningfield 2001). Some studies also suggest similar products in the United States may have contributed to escalated smoking rates among youths and young adults in the 1990’s by fostering nicotine addictions that were then translated into cigarette use.

Patterns of nicotine use are influenced by complex factors and the Swedish Phenomenon may be open to interpretation for a while yet. That being said, there can be no one-size-fits-all solution so while there is value in learning from individual case studies, it should not be taken as a recommendation for application in other contexts.

WHO, 2010, 10 Facts on Gender and Tobacco, World Health Organisation, Switzerland.