Conurbations of east Java merge into a conglomerate metropolis, thickly veiled with the yellow fumes emitted from car exhausts and tobacco leaves.

According to WHO, tobacco related illness is ranked among the top three in the world for both developed and under-developed countries, with a mortality rate predicted to reach 8.4 million in 2020 (Twombly, 2002). Tobacco inhalation is a leading cause of death with particular relation to non-communicable disease across the globe (H Van Minh, et al, 2006). Ranking as the 3rd highest smoker per capita in the world, it has been officially classed as an epidemic within Indonesia. With an approximation of 33% of the total population (67.4% of men and 4.5% of women) being smokers (World Health Organization, 2018).

Indonesia is a vast archipelago of contrasting cultures. Many of those cultures, especially within big cities like Surabaya, are densely situated. Regardless of opposing religious and lifestyle views, many Indonesians employ tobacco use as an intrinsic part of their day-to-day lives. Regardless that there have been a set of laws implemented into the creation of ‘safe-zones’ for smoke inhalation, these rules are often ignored. A study of the health intervention strategies of selected schools found that in Indonesia “even though schools are supposed to be smoke free areas, the informants often see their male teachers smoking” (Tahlil et al., 2013).

Something I noticed when walking through the streets of the Arab district was the ability for the community to band together and effectively administer a set of rules for selected areas. With particular focus on alleys where young children would reside. Signs posted stated “dilarang menaiki kendaraan di dalam kampung”, which translates to “riding a vehicle in the village is prohibited”. 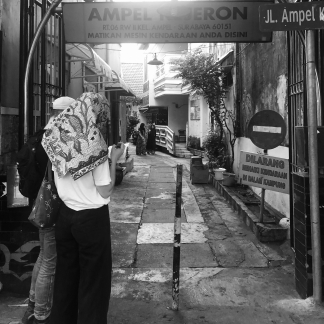 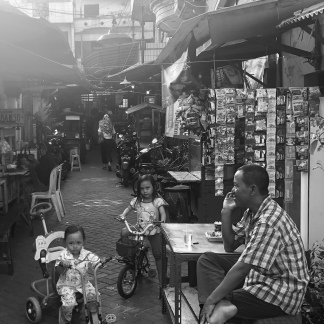 Children playing in a relatively smoke-free zone, due to low-vehicle access.

In contrast to the legislative efforts administered by the local government to implement safe zones, these locally controlled areas proved to be successful with regards to public compliance. With an emphasis on limiting the flow of vehicles within the alleys, most local cafes and transport junctions were situated on the surrounding main strips. These were high activity zones for smoking – due to the prevalence of Warkop’s and transport workers within that area.

Men socialising at the Warkop Sarram

A transport worker having a cigarette break sitting in his Becak

Smoking across Indonesian society is embedded heavily within their social dynamics as it connotes a sense of  camaraderie, particularly among men. With a statistic of 85% of transport workers being smokers, (Rita. K, 2014) it is not surprising that these high prevalence zones correlated with the male dominated hang-outs and transport junctions. Whereas in the restricted vehicle zones leading to the Bazaar and Sunan Ampel Mosque and Tomb, there was vastly lower prevalence of smoking activity.

The map I have generated outlines the high and low smoking zones, as well as the operations within each area.