My trip to Gresik was even more exciting with Pak Yalfari, a Grab driver, who is cheerful and loves telling stories. On the way, I told him that I am going to visit this woman who is a throat cancer survivor. Pak Yalfari was immediately sounded very curious and repeatedly ask questions about this woman. I asked him why he is interested about her story. Then, he acknowledged that he was once a heavy smoker for 30 years. He discovered a cigarette from his friends and had been addicted to smoking since he was 10 years old. 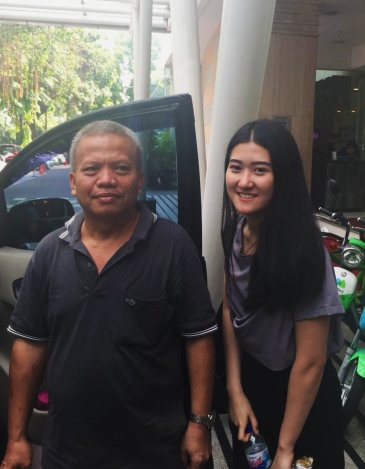 Before migrating to Surabaya for working as a worker in an export-import ship company, he was born and raised in a small village called Kerinci in Jambi, Sumatra. Kerinci village are surrounded by lots of plantation. The cold atmosphere in the village triggers people to smoke. Pak Yalfari said to me that it is rare to meet people who are non-smokers; the fact that Kerinci get the highest rate of smokers compared to other village in Jambi (Departemen Kesehatan RI 2018). Not only men, women who are farmer or married are mostly smokers (Tribun Jambi 2011). He already knew the dangers of smoking from advertisements and health warnings on the cigarette packs, yet the pleasure of smoking is stronger than the long-term effects. From an interview in a scholarly journal about smoking behavior, it is concluded that people admitted that smoking was able to provide a sense of relaxation and warmth (Mulyani 2015).

‘Smoking is a waste,’ said Pak Yalfari. During the trip, he made a joke and imagined the calculation of money if he did not use his money to buy cigarettes instead saving them. ‘I would’ve been rich, if I didn’t smoke,’ he said with laughter. He smoked 3 packs for 2 days regularly, that means if one pack is 20.000 rupiah, he spent 60.000 rupiah every two days.

Yalfari’s wife, who is a nurse, always encouraged him to quit smoking because his mouth became stink. He also realized some changes in his body. His stamina weaken, he would be easily exhausted when doing fast activities. Moreover, before he went to bed, his breath sounds like a loud pinched sound. But none of this stopped him from smoking. Until he worked as a freelance driver, before he became Grab’s driver. He realized that many of his clients who smoke have a very bad breath, the smell stuck on his car and was disrupted him while driving. Since that time, Pak Yalfari has begun to reconsider his smoking habits. Until 10 years ago, he decided to quit smoking. Pak Yalfari found that he could quit easily because it is based on his own desire. The pleasure of cigarettes is still haunting his head sometimes, but considering his wife and the disgusting effects of cigarettes, he dares not to touch cigarettes again.

Tobacco advertisings seen on small shops (warung) and billboard during our way back to Surabaya from Gresik.

In addition, when I wondered about the massive cigarette advertisements displayed in small shops or warung along our trip, it turned out that Pak Yalfari is involved in this matter. He owns a warung in Sidoarjo. Even though Pak Yalfari is non-smoker now, yet he confessed to still accept any sponsorship money from the tobacco company.  It cannot be denied that the tobacco company is very helpful for small businesses like warung to get their main fund for free (Nitcher et al. 2008). Pak Yalfari said that advertising small banners usually paid for 3 packs of cigarettes, and large banners can be paid up to 300,000 rupiah.