The Centers of Disease Control and Prevention (CDC) Tips From Former Smokers Campaign was downright scary.

For the twelve weeks in 2012 that the multi-media initiative ran in the US, it was difficult to escape the horrifying reality of smoking.

From social media badges to television advertisements, the campaign’s wide reach was possible due to the $54 million of federal government funding (CDC 2018) (Rigotti & Wakefield 2012, p. 907).

The campaign’s goals aligned with the WHO Framework Convention on Tobacco Control’s suggested measures for reducing tobacco demand via public awareness and encouraging cessation (WHO 2003, pp. 10-13). The CDC’s goal to ‘Encourage smokers to quit, and make free help available’, by informing people of the adverse health effects proved successful for the three-month duration (CDC 2018, para 7). 207, 519 more calls were made to the provided quit line, compared with the same period of 2011 (Rigotti & Wakefield 2012, p. 907). The success of the public awareness goal was also seen on Twitter, as 87% of Tips-related tweets displayed message acceptance, and sparked further conversations online (Emeryl et al 2015, p. 286) (Emeryl et al 2015, p. 290).

Across all media formats used, the campaign featured faces and bodies with smoking-induced disfigurations performing their everyday tasks. Text conveyed haunting ‘advice’ from the former smokers, and the quit line number included a free and immediate resource to act on those fears. 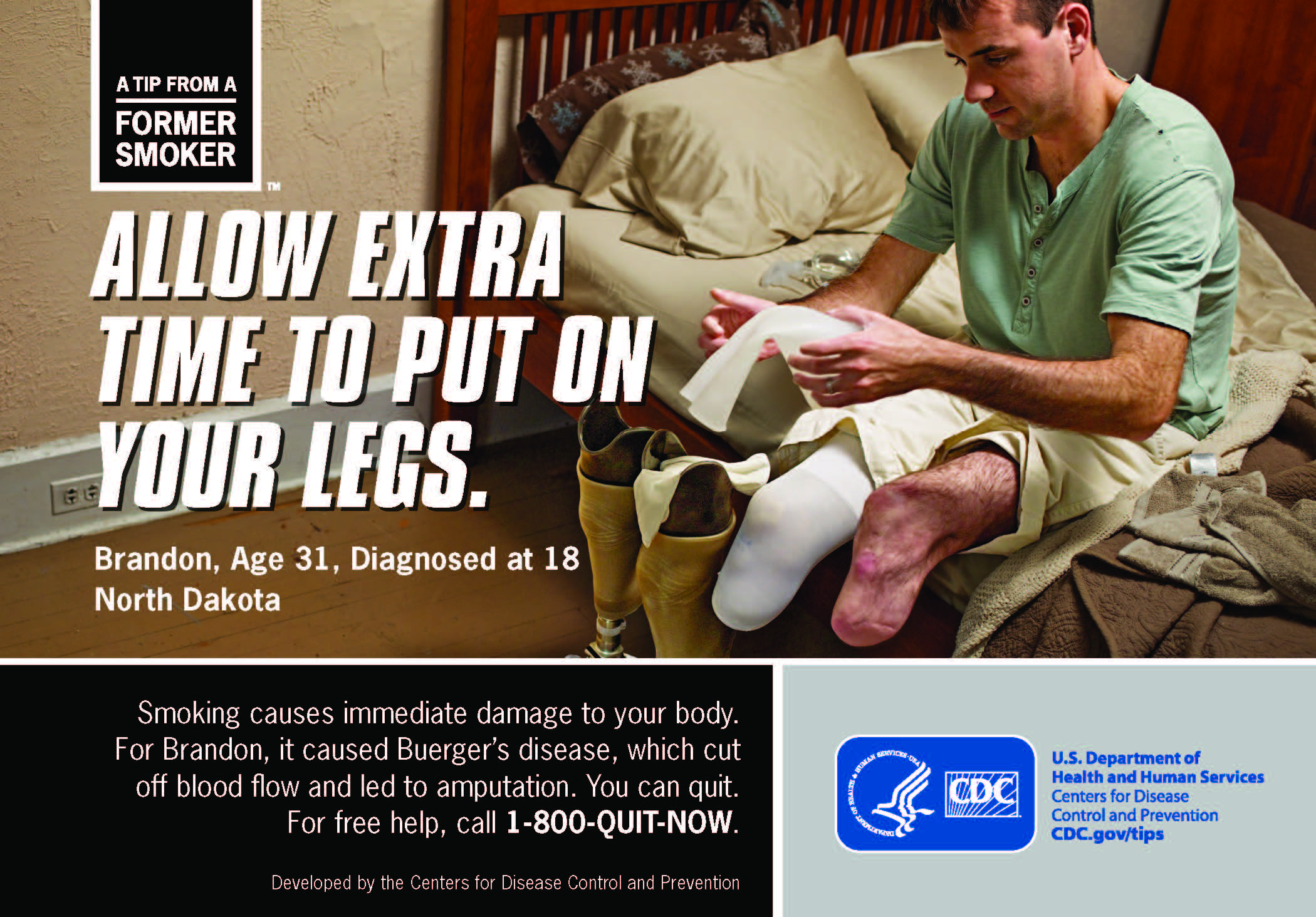 Fear has proven to be the most effective method for tobacco consumers to take steps towards smoking cessation across a wide demographic (Andrews et al 2014) (Emeryl et al 2014, p. 278). The CDC’s scare tactics were particularly successful due to the underlying theme of ‘Real People, Real Stories’. The damages presented were clearly severe and abnormal, yet they were normalised through everyday routines, rather than dramatized. Communicating the risks via inescapably real stories emphasised the health implications as something that could happen to anyone. It thus reduced common reactions of distance and denial towards cigarette warnings (Rigotti & Wakefield 2012, p. 907).

Overall, the campaign was highly successful in the period that it ran for. But what about after?

After the designated advertising period ended, the number of quit line calls dropped (Rigotti & Wakefield 2012, p. 908). A substantial hindering factor to this campaign, and ones like it, was the high saturation of commercial tobacco marketing and long-term addiction that outlasts the prevalence of warning messages (Durkin, Brennan & Wakefield 2012, p. 133).

Whilst the campaign seized short-term successes, a truly successful initiative works simultaneously along supply and demand chains in a long-term effort to sustain the terror of tobacco (WHO 2003).