As my tutor once said,

Don’t be that guy who designs a betting ad on the Sydney Opera House.

Such advice is important to remember going into the ‘real world’ and realising that with design comes responsibility, especially when you have industries going unchecked like the Australian betting industry or big tobacco in Indonesia.

Integral to the Indonesian tobacco industry’s success is the pervasive nature of their advertisements and the way in which they pinpoint and target specific values like nationalism and modernity. In the upscale Djarum Black’s adverts, the sleek black packet is depicted as elegant and directly appeals to the upper middle class and the modern smoker. It notes that those who smoke Djarum Black are progressive and value new ideas. Similarly, their advert for “New Djarum Black Cappuccino” features a costly drink that isn’t drunk by the masses, linking this refined modern taste with traditional Indonesian kretek (Nichter et al. 2009). It’s this visual freedom that Indonesia’s tobacco design has, compared to somewhere like Australia, that allows it to play such a huge role in its success.

In Australia, a comparative case where one industry was given overreaching freedom in its advertising medium is the scandal around Racing NSW’s use of the Sydney Opera House for its own advertisement. This kind of promotion comes in breach of the guidelines for the World Heritage-listed structure to be managed in the public interest (The Age 2018), and while Racing NSW is not a private company, it sets precedent for big brands to target landmark sites such as this. While it is unlikely that Racing NSW will attempt to advertise on the sails of Sydney Opera House again (Butson 2018) due to the massive backlash, it is imperative that Australians remain vigilant against such propaganda taking over our beloved landmarks, as has already been demonstrated through active protest.

While we do not always have control, as designers, over the content we design, we do have the choice to design for causes we believe will better humanity or protest as consumers against a design which oversteps its place.

For the sake of primary research and getting to know the health situation amongst the local population, I chose to interview someone who works from a Puskesmas, a government-mandated community health centre, which can often provide some of the services a hospital might as well. Having gone to a boarding school with strict rules, she and her friends didn’t smoke throughout their teenage years and has never smoked a cigarette to this day. In her opinion, it’s a bad habit that can be easily eradicated from Ambonese culture.

In my interview with Puskesmas Karang Pajang’s general practitioner, H. Nivaan (2019, pers. comm., 18 January), we spoke about her experience with patients who smoke or breathe in second-hand smoke frequently. Nivaan says that Ambon faces problems with diseases such as tuberculosis, one of the most common lung diseases there, with studies (Boon et al. 2007) suggesting that passive smoking may increase the risk of acquiring tuberculosis, especially for those within the same household as someone afflicted. Older patients will often say they have smoked since they were young and it hasn’t done them any harm, but will come to the Puskesmas with significant signs of COPD such as shortness of breath and coughing, and won’t know they have something like emphysema until they get to a hospital. In cases such as these, people who are diagnosed with TB do not stop smoking, and they do not believe that smoking was the cause of harm.

Perhaps the most surprising discovery I heard from Nivaan is that most people are not aware of the harm second-hand smoke can cause (Nichter et al. 2009). According to an article in the Jakarta Post (2001), Indonesia is believed to be a hazardous area for second-hand smoke due to the number of smokers, which is believed to have reached 141.44. million. Nivaan says that people will smoke even near babies or their pregnant spouse, and mothers will come to the clinic with sick children not knowing that it is their husband’s smoking that is causing them harm. For such vulnerable groups, raising awareness seems to be the first step to eradicating tobacco-related diseases, but for those who do not want to quit after being educated about such dangers, there is nothing more that can be done from the side of medical health professionals in Ambon.

As the main city and gateway to the Maluku Islands, otherwise known as the Spice Islands for the nutmeg, mace and cloves originally found there, Ambon has a long history around its oldest source of wealth, something that drew Dutch colonisers in the 17th century (Rachman 2016). Cloves, having medicinal properties and use as a food preservative, have been valued around the world, with clove-based oils being used as a natural analgesic for toothaches, an antiseptic for aquarium fish, and in teas as an anti-flatulent (Rachman 2016).

This country wouldn’t be a nation without cloves.

One aspect of tobacco culture that initially might go unnoticed to a foreigner visiting Ambon and Indonesia as a whole is the presence of kretek, indigenous clove cigarettes. In every cigarette display at the counter, clove cigarettes make up the majority of options available, indicating a preference of the locals towards the more fragrant choice. Statistics from Tobacco Control, London (Hurt et al. 2012) show that kreteks account for over 92% of the retail sales volume of cigarettes in Indonesia. Rachman (2016) writes about Ambon, “The scent of cloves, wrapped up and smoked in cigarettes, has long permeated daily life in this archipelago, from urban cafes to far-flung tropical spice islands like this one.” One of the key themes in advertising involves smoking as a means to uphold traditional values whilst at the same time emphasising modernity and globalisation (Nichter 2009), indicating how smoking culture in Indonesia relates to their identity involving traditional spices.

Map of tobacco culture in Ambon 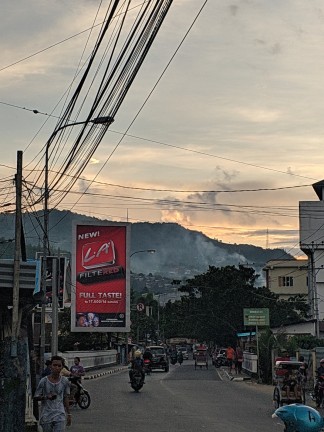 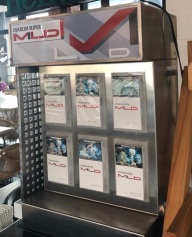 In contrast to this, “flavoured” cigarettes have been banned in the US under the Family Smoking Prevention and Tobacco Control Act in 2009, a category which clove cigarettes fall under (Edwards 2019). With its sweet flavour, kretek is considered a gateway product, softening the harsh taste of tobacco smoke and making it easier for new smokers such as younger children to start their addiction. It has also been found that clove cigarettes contain more nicotine, tar and carbon monoxide than conventional “white” cigarettes (Nichter 2009) smoked in the West. Due to the anesthetic quality of the clove, they tend to be inhaled more deeply, taking more time and puffs to finish, and in turn, leading to smokers facing up to 20 times the risk of acute lung damage compared to nonsmokers (Martin 2018).

Stoptober is a national campaign that launched in England in 2012 based on behavioural change theory that uses both traditional and new media to create a positive mass quitting trigger. It is designed to encourage smokers to quit smoking for 28 days during the month of October based on the insight that you can achieve this, you are five times more likely to quit for good (Bennett 2017). Stoptober is estimated to have generated an extra 350,000 attempts to quit smoking, saving around 10,400 years of life. The campaign is considered to be highly cost-effective, coming in at less than £415 (740 AUD) per discounted life year. With fifty percent more people attempting to quit smoking compared to other months in the same year (‘Stoptober success’ 2014), it is considered a successful campaign in both effectiveness and cost-effectiveness.

Between 2008 and 2016, a study of mass media expenditure towards smoke-free campaigns such as Stoptober found that there was an association between higher expenditure on tobacco control campaigns in England and an increase in quit success rates (Kuipers et al. 2018). Funded by Public Health England, Stoptober reaches out to the public through TV, radio, traditional and digital press, media partnerships, and local and regional organisations such as the national Stop Smoking Services. 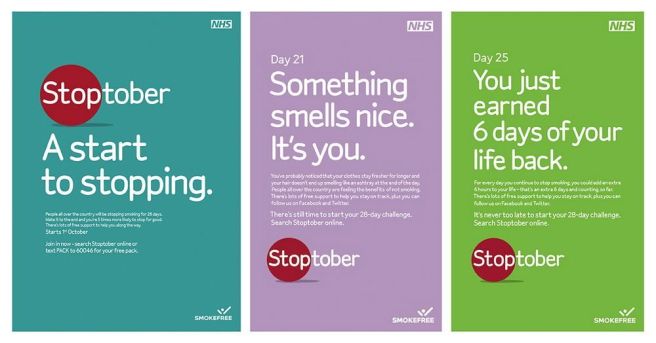 The multi-faceted public health campaign provides support for staying smoke-free through motivational text-messaging, and an app for self-monitoring progress. Psychological principles such as the use of SMART (Specific, Measurable, Attainable, Realistic and Time-sensitive) goals means that a difficult behavioural goal seems more attainable through starting with very specific intermediary goals (Brown et al. 2014). PRIME theory is also considered in the use of motivational text-messaging and peer support via Facebook, the theory being that behaviour is determined on a moment-to-moment basis due to a variety of inputs, impulses and emotional states (Brown et al. 2014). Frequent messages provide a trigger for smoking cessation and Stoptober provides an opportunity for people to do the challenge at the same time as others. 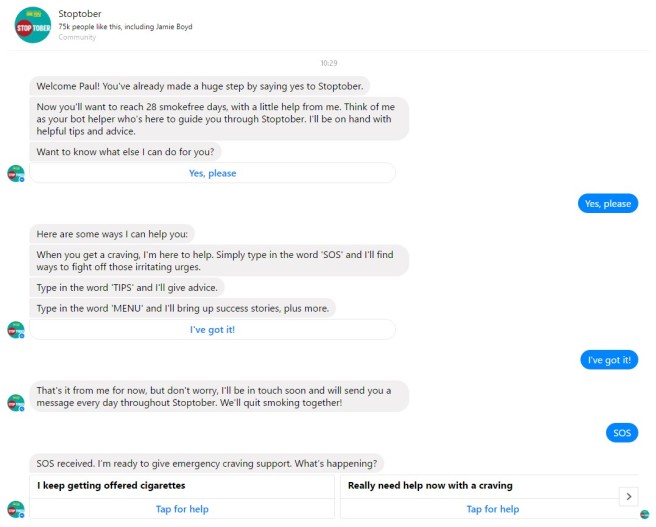 Overall, the mass media campaign Stoptober has provided good value for money as a tool for digital support for quitters and life-saving public health intervention. The campaign’s use of key psychological principles with a clear behavioural target has made a substantial impact on public health in triggering serious quit attempts and significant behavioural change.