Batik is a traditional Indonesian dyeing technique that utilizes a wax-resist dye to create elaborate and vibrant material. “Historically, Batik was subject to a high degree of formality and symbolism, and the designation of batik by UNESCO in 2009 as a Masterpiece of Oral and Intangible Heritage of Humanity now obliges the Indonesian government to preserve its original forms.” (McDowell 2013 p.41) 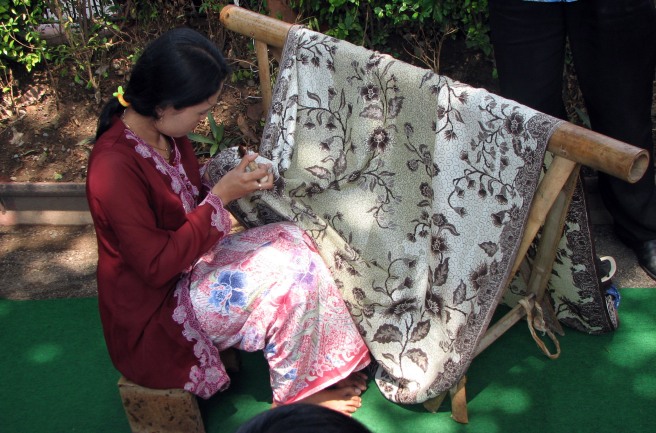 Indonesian fashion designer Iwan Titra has often been credited with the revival of batik into contemporary fashion design. During the 1970s and 1980s Iwan began his career in fashion design, producing his first collections with traditional batik cloth. In the decades following, batik entered the mainstream fashion market and served as an inspiration for many European fashion designers.

The popularity of batik in the last decade has resulted in a rapid growth of the industry within Indonesia and in many cities batik is one of the largest manufacturing activities. However, “its flourishing trade has come at a price.” (Clean Batik Initiative 2010) The growth in the production of batik has resulted in many questionable manufacturing processes, “Batik production is one of the heaviest polluters in the country… The sector is characterized by inefficiency, a poor environmental record and lacks law enforcement and sensitive consumer behaviour.” (Andrea Booth 2010)

The ‘Clean Batik Initiative’, which operated from 2010 until 2013, was a design group attempting to “help produce batik in a sustainable manner, by minimizing the negative effects the batik industry has on the environment.” (Andrea Booth 2010) In the four years the initiative operated, the design group successfully achieved local awareness of the environmental impacts of batik whilst also creating a space for environmentally conscious consumers in Indonesia and the rest of the world to purchase ethically produced batik. 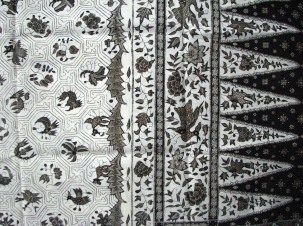 Conducting primary research on the subject of batik, I interviewed my cousin on his personal attitude towards batik and what he observed during his time living in Indonesia. Richard Hunter, was born and raised in Jakarta before commencing his high school education in Australia.

When you lived in Indonesia were you aware of its popularity?

When I went to school I learned how to make batik. It’s very popular in Indonesia. Every Friday the office workers don’t wear suits to work but they wear a collared batik shirt. So pretty much everyone who grew up in Indonesia has some sort of batik attire.

Does Batik hold any cultural significance for you?

Batik does have cultural significance for me because it means home and that is the only time when I get to see batik.

Design means different things in different contexts due to the religious, social and political differences that exist in every culture. Each culture places a different weight on these issues and in Indonesia there is a heavy influence of religion and ancient customs within their culture and this has been demonstrated in the contemporary fashion within the country.

“Indonesia is the world’s most populous Muslim-majority nation, with there being over 88 percent practicing Muslims, therefore the Islamic culture has a strong and widespread influence.” (Shahzeen Eram 2015) As a nation that regards religion as a significant part of their culture, fashion and design have progressed in Indonesia catering to what Indonesian Muslim women want to wear.

Each part of the body has its own physiological purpose and a different symbolic meaning. But each part of the body also holds a different significance in every culture. ‘While the head has been almost universally recognized as the seat of consciousness, the Japanese give the nape of the neck a sexual significance that it does not posses in the west. The feet, while occasionally fetishized in the West, are still seen in some tribal societies as offering evil spirits a way to enter the body from the earth and in many parts of southeast Asia they are so closely associated with dirt that revealing the soles of the feet in public is considered a huge insult’ (McDowell 2013 pp. 46-47)

Islam’s influence on Indonesia originated from trade with India in the thirteenth century and has resulted in the hijab becoming a common and symbolic piece of clothing for Indonesian Muslim women. This concealment of the hair holds a strong religious and symbolic meaning for Indonesian Muslims and has prompted fashion designers to involve beautiful and intricate designs when producing hijabs to meet the demand for Indonesian Muslim women wanting there hijab to be a fashion statement. “In today’s global competitive marketplace, style for the modern Muslim woman is evolving; incorporating fashion from the West while at the same time appreciating traditions and believes of the generations before.(Ratna Dewi Purnamasari 2013) 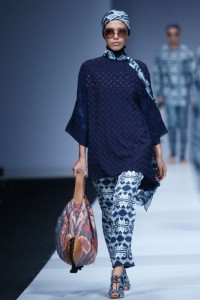 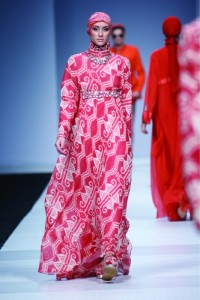 One such designer who has embraced designing solely for the contemporary Muslim Woman is Fashion designer Itang Yunsaz. In Jakarta Fashion Week 2015 Yunsaz showed his Spring/ Summer 2015 collection that utilized a variety of weaving techniques from central and eastern Indonesia, such as Balinese weaves and Sumba Ikat weaves. This collection has been highly commended and Yunsazs presence within the fashion industry demonstrates the demand for remarkable and contemporary fashion for Muslim Women.

‘The Act of Killing’ is a haunting documentary that follows the lives of Anwar Congo and his friends who are living in Indonesia. In one of the opening scenes of the film Anwar proudly asserts that he is a gangster, explaining, ‘the word gangster comes from English; meaning free men’ however it is later revealed that being a ‘gangster’ meant that he assisted the Indonesian army in killing more then one million alleged communists from 1965 to 1966 and has received no persecution for his crimes.

On the documentary, the filmmaker Joshua Oppenheimer says, “The Act of Killing is about killers who have won, and the sort of society they have built. Unlike ageing Nazis or Rwandan génocidaires, Anwar and his friends have not been forced by history to admit they participated in crimes against humanity. Instead, they have written their own triumphant history.” (Oppenheimer 2012)

(Images from the ‘The Act of Killing’)

One of the most disturbing aspects of the film is the lack of remorse that almost all of the people interviewed show. In one scene Anwar leads the audience to the rooftop of a small store, revealing, “there are many ghosts here because many people were killed here… At first we beat them to death but there was too much blood, there was so much blood here… It smelled awful… To avoid the blood I used a system” (The Act of Killing 2012) Demonstrating on a friend Anwar wraps a piece of wire around the neck of the man and shows how he would have pulled it to decapitate a head. His attention to the detail and muttering of “face that way, we need to re-enact this properly” is particularly chilling. He then begins to dance, unphased by what he had just demonstrated moments ago. At another point, further in the film Anwar reveals that he had personally killed more than one thousand communists.

(Images from ‘The Act of Killing’)

My personal reaction to the film was one of horror at the disturbing and grotesque atrocities that the protagonist Anwar and his accomplices committed. However the outgoing and friendly personalities that they held for the duration of the film and Anwar’s slow but eventual decline into regret over his actions prompted me to feel an unusual sense of empathy for these individuals. When interviewed on the film, filmmaker Joshua Oppenheimer says, “I think by identifying with Anwar, audiences are forced to confront the fact that we are all much closer to perpetrators than we like to believe. I think the whole tradition in which documentaries tend to tell the stories of survivors and victims exists, in part, to reassure ourselves that we are not perpetrators, however, the fact is we are much closer to perpetrators than we like to believe.” (Inside Indonesia 2013)

‘We human beings live a contradiction. In our endeavor to sustain ourselves in the short term we collectively act in destructive ways towards the very things we and all other beings fundamentally depend upon’ (Fry 2009, p. 22) Within his text, Tony Fry highlights this issue of human beings destructing fundamental resources. In relation to this idea, I’ve examined the design project ‘The Recycled Park’. Currently this unique project is underway in the city of Rotterdam in the Netherlands in which litter and waste is retrieved from the Nieuwe Maas River to prevent it being washed out to the North Sea. Floating parks are then created through recycling the collected waste. Essentially the project is based on the idea of enhancing the natural beauty of the city through creating parklands that have been established on recycled waste.

This project highlights the importance of design ideas that tackle local issues whilst ultimately having a global impact. Unclean and contaminated water is currently a widespread issue, with it having a detrimental impact on human health and vital aquatic ecosystems. “The recycled Park was an initiative of the ‘Recycled Island Foundation’ and ‘Whim Architecture’” (Inhabitat 2014) and has been an interdisciplinary project in which students from both Rotterdam University and Wageningen University have assisted in the preparation, collection and organization of the waste.

The project works in that waste is retrieved form the river using an already existing plastic visser that collects and sifts through the waste. “The plastic visser utilizes a finger sieve, which separates the large material from the small material and returns the organic waste back into the river. What remains in big bags is clean material that is then able to be recycled to build the foundations of the floating park.” (Recycled Park 2014)

This project highlights the importance that designers have on providing unique solutions to global problems. This design initiative is progressive in the sense that it tackles the issue of waste however it does not solve the problem of the excessive waste being there in the first place. Until the issue of copious amounts of waste existing is tackled from its origin, designers will continue to have to seek methods to challenge the waste produced.