Joshua Simandjuntak is an accomplished Indonesian designer, and leader of Karsa, an innovative design studio based in Jakarta. The studio employs talented Indonesian designers to produce furniture and home accessories, priding themselves on the use of hand picked materials made locally into high-quality designs, which are sold globally. After discovering Joshua through his collaboration with world-renowned designer Tom Dixon, I contacted the Karsa studio and asked Joshua on his thoughts about contemporary design issues, such as ecological sustainability, and his decision to return to Indonesia after studying in the UK.

I would like to thank Joshua for taking time out to offer insight into his design practice and what he holds important as an Indonesian designer.

[All Images courtesy of Karsa.co]

1) Why did you choose to return to Indonesia after completing your studies in the United Kingdom? Do you feel there is just as much opportunity as a designer in Indonesia as in other parts of the world?

I did not chose to return to Indonesia after completing study at the RCA. I went to explore the opportunity of being an entrepreneur in the UK. Along with fellow RCA graduate Antonio Arevalo and a friend Byron Miller, we set up a studio, which we named Fusion Design Studio after our favourite concept of multifunction objects.
I then worked for Tom Dixon as a Product Developer which job is to work along with sub-contractor / producer and translated Tom’s designs into productions.

2) How do you value your collaboration with Tom Dixon?

Along to answer the question 1 – Tom has inspired me in way of looking into design process. An afternoon conversation with Tom had me decided to return to Indonesia with a fresh set of eyes looking into the potential of materials, skills and processes, which can be turned into great designs. 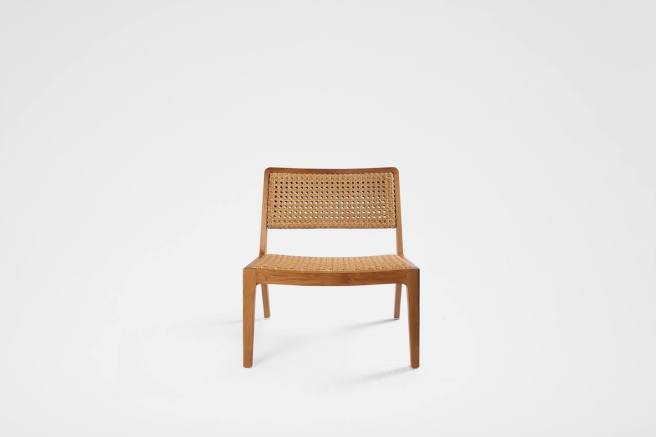 Environmental issues often are overused and quite possibly abused. Our translations of ecologically sustainable design is by creating a long lasting, well designed and well made pieces of furniture that is last. Meaning that we will make people cutting less trees to get more wood to replace their broken furniture. Lasting piece of furniture is less wood being used.

4) Lastly, what is a design of yours which you are particularly proud of?

I particularly fond of Karimun coffee table as she is a representation of Indonesian culture without implementing the obvious decorative elements. I always proud of Rakata low chair as she has a well balance proportion between traditional hand made woven rattan pattern and the calm lines of wooden frame constructions. I am currently in love with the Swara Table as this is the long obsession being fulfilled which was to create a harmonious marriage between wooden furniture and sound.

Interestingly, Indonesia has the largest Muslim population of any country in the world. Islam has spread through the archipelago since the thirteenth century, mainly through trade routes that linked coastal communities to each other [Boellstorff, 2005]. The dominance of this religion in Indonesia plays a major role in creating a sense of community, and Vice’s short documentary ‘Vice Guide to Travel: The Warias’ explores the way an Indonesian transsexual community in Java consolidates their strong religious beliefs with their gender identity.

[All photos by Oliver Purser, courtesy of Vice.com]

Maryani is a transgender woman and devout Muslim, and the documentary recounts the hardships she and other Waria face. Waria (the Indonesian term for a transsexual) have for centuries been accepted as a third sex in Indonesian culture, though the rise of Islam has created prejudice within some parts of the community, which makes it difficult for Muslim Waria to embrace both their faith and identity. Islam only acknowledges two sexes – male and female – and it is difficult for Muslim Waria in Indonesia to find accepting places of worship as mosques are typically segregated by gender. In response to the difficulties she and other Muslim Waria’s face, Maryani created Senin-Kamis, an Islamic boarding school, which offers a safe and accepting place for Waria to practice their religion.

The documentary follows the day-to-day lives of the women in the boarding school, and delves into transgender issues in the context of a developing country. Many of the women make a living off of street performing or prostitution, and Maryani herself began working as a prostitute at 15, then worked her way up to owning her own beauty salon, something many Waria aspire to. She states “Everybody needs to make a living, some choose to be prostitutes, some become thieves, some become con-men. God will still bless them.” (Maryani, 2012). This attitude of acceptance is the basis of the Waria community, and creates an atmosphere where each woman can practice her faith and make a living in a tough environment without judgement from others or from God.

‘Tough’ may be an understatement, as viewers follow Maryani to a funeral of a fellow Waria woman who passed from HIV complications. There are no outward signs of mourning from any of the attendees, and it becomes clear this of not a rare event, with usually 4 Waria funerals taking place each month. Maryani warns of the dangers of the deceased’s lifestyle in a speech before the funeral procession. HIV is a major issue within the Waria community due to high rates of prostitution, lack of education, and lack of drugs to contain the virus.

Despite the tragedy of these events and the discrimination each Waria faces in her community, the smiling faces of each woman as they farewell the reporter with a Waria makeover shows the joy they have found within Senin-Kamis. The school truly allows them the freedom to embrace their true selves without fear of judgement or rejection, Maryani standing as a mother figure, ready to embrace any woman of God.

Indonesia is facing a serious challenge managing municipal solid waste (MSW), with levels of MSW rising with an increasing population and economic development, though lacking an effective strategy in treating and sanitizing the resulting landfill [Manuwar, 2014]. On February the 11th 2014, Indonesia’s Ministry of Environment (MoE) publicized plans to simplify current industrial waste laws with new and effective regulatory framework, and at the same time comply with stricter waste management standards [GBG Indonesia, 2014]. As the government begins to seriously address and find solutions to the waste crisis, progress begins on a smaller local level, and small design solutions are popping up to address the issue.

[All Images courtesy of http://www.ffrash.com ]

One such design solution is Ffrash, a design initiative, which produces sustainable, high quality furniture and interior products from local trash. The Dutch/Indonesian design initiative partnered with Kampus Daikonia Modern (KDM) to educate street children in innovative design processes, which turn waste into high-quality interior products. The company is entirely not for profit, and has multiple sponsors such as The Intercontinental and The Kingdom of the Netherlands. This allows all profits to be invested back into the company, and train more disadvantaged youths in sustainable practices, hopefully for generations to come. The company addresses three key factors in its design practice – economic growth, environmental issues, and poverty – which allows for sustainability both now and in the future.

In October 2012, 25 students were preselected from KDM and other shelter organizations to begin Ffrash training, and were taught product design, focusing on creativity, manual skills and independence. After a round of interviews the first group of artisans were selected. In January 2013, a new group of junior artisans were selected from former street-children, both groups becoming senior artisans in early 2014. This cycle of development creates sustainability on a basic ground level, where as these young people learn invaluable skills to gain both independence and stability, they are able to pass these skills on to the next group of willing participants, as is the case in Ffrash, where senior artisans now teach the next generations. By embracing children from any disadvantaged background, the company aims to help break the poverty cycle, which can only be done by providing education and skills. 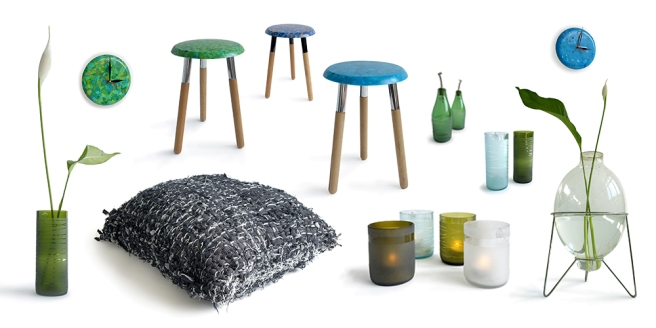 Each collection is designed by a different, well-known Dutch designer, and is available for sale online and in three stores in Indonesia, and one in Amsterdam. The products showcase innovative and sustainable design at its finest, and include a clock and stool made out of bottlecaps, which have been smoothed over to create a dynamic speckling of colours, and up-cycled denim that has been shredded and re-woven to create textured pillows. Each design is made more exceptional by the sustainable and innovative practices that created it, which not only works towards ecological sustainability within Indonesia, but also betters the lives of talented locals in disadvantaged situations.

Climate change is one of the most pressing international issues of the past decade, and Indonesia currently holds the highest deforestation rate in the planet, and is the third largest emitter of greenhouse gasses, not to mention the archipelago nation is also at risk of rising sea levels [Beech, 2014]. The Indonesian government has shown concern over climate change as a social and political issue, as exemplified in the October 7, 2009 during the United Nation talks on Climate change. As a commendable step towards tackling the issue, in 2009 the government introduced a new initiative for reducing emissions from deforestation and degradation (REDD), including the Berau Forest Carbon Program (BFCP) which aims to reduce emissions by 26% by 2020 [unknown, 2010].

As climate change affects the whole world, the call for ecological sustainability has been shaping innovative design practices globally, and is a prevalent example of the way design is shaped by social and political context. Indonesia is no exception and has shown innovative design work across many fields of design as a response to the urgency and seriousness of climate change.

Environmentalist and Bali-based Canadian designer John Hardy, with designer and wife Cynthia Hardy, designed and constructed an eco-school which is wholly constructed by sustainably harvested bamboo and uses renewable energy systems to power the building. They teamed up with the non-profit Meranggi Foundation, which develops bamboo plantations through local farmers, and architecture firm PT Bambu, whom specialize in bamboo architecture. The renewable energy systems in place in the school include a bamboo sawdust hot water and cooking system, solar panels, and a hydro-powered vortex generator [Meinhold, 2014]. It was named the 2012 ‘Greenest School on Earth’ [Yuni, 2012] and offers a holistic education with a strong focus on sustainability for future generations. The school is a triumph in eco-design and will continue to inspire the lives (and design practices) of future generations by imparting a sense of responsibility to the Earth, which will aim to mold life and design in Bali towards a more sustainable future.

Industrial Deisgner Benno Zindel, while on exchange at the Institut Teknologi Bandung in Java, designed and produced a biodegradable rattan seat [Lisa, 2012]. It supports a number of seating positions, and is an example of the way the seriousness of climate change has shaped product design towards using sustainable and environmentally friendly materials. This seat is intended to replace non-biodegradable plastic chairs and stools, and thus lessen contributions to landfill in Indonesia. Over the next coming years, as the issue of climate change only magnifies, it is only logical that the local and international context will inform many designers, such as Hardy and Zindel, to consider their impact on the environment, and take this knowledge and responsibility into in their design practice.

Lisa, A., 2012, Kursi Java is a Biodegradable Rattan Seat For Sitting Comfortably on the Floor, Inhabitat, viewed 25 April, <http://inhabitat.com/kursi-java-is-a-biodegradable-rattan-seat-for-sitting-comfortably-on-the-floor/ >