While in Surabaya we interviewed and spoke to many people, from students to drivers, gathering a range of perspectives to better understand the issue from the ground. These interviews revealed the various nuances that surround the issue. Riyadh, a retail employee working in a high-end chocolate delicatessen, is one of these people that reflected a different attitude to most of the students and individuals I met in Surabaya. Riyadh recently moved from South Sumatra to find work to support himself and family. South Sumatra is known for the low-income levels and the high unemployment rate, with many farming areas within the region (Lisanty & Tokuda 2015). Riyadh says his parents own/run a farm and also a separate local warung nearby. Research into farming in regional Indonesia reveals that the average household total income, from off-farm and on-farm (other than paddy farming), was IDR 3,569,635 a year, which is a daily income of less than $1 (AUD) a day (Suryahadi & Hadiwidjaja 2011). He notes that he was more well off compared to others in the region as he was able to attend school and they had a moderate house closer to the town area. Riyadh says that it is because of his education that he was able to move to Surabaya and have a job, although stating it has been difficult, as he didn’t have a job for a long period of time.

Riyadh’s experiences challenged my preconceived ideas about smoking levels in rural Indonesia. He notes that although many farmers and people in his area choose to smoke, his family does not. His father has always been strict on this and his reasoning for forbidding it upon him was very closely tied to the cost of smoking, and his father always refused the ‘smoking lifestyle’ as he deemed it as ‘unaffordable and unnecessary use of money’.

Studies reveal that on average 72.9% of rural families in Indonesia smoke, with paternal smoking associated with greater household food insecurity (Semba et al. 2011). Riyadh’s father’s choice not to smoke is something that he regards his father highly for, as he is aware of the positive impacts it has had on his life. He reflects on how some of his friends back in South Sumatra, are still living a low quality of life and how he sees himself as fortunate to be able to afford to live in Surabaya. Riyadh reflects hope for the youth of Indonesia, being understanding of the negative impacts of tobacco and unafraid of being called ‘less of a man’ due to his choice not to smoke, ‘I don’t believe in those things. It doesn’t make sense to me that [a] cigarette means you are one thing or not’. Riyadh is one of the few people who I’ve met in Indonesia who is actively aware of the manipulative tactics of tobacco companies, which I think is reflective of the values he was brought up with. He believes that there is more opportunity in the city of Surabaya for him, although being unsure about where he will do next after his retail job.

“The designer as the creator of a persuasive image or message, has an ethical responsibility to understand the impact their message will have” – D K Holland

The design of the tobacco industry in Indonesia, from advertising to the carrying out of sponsored events, is purposely created to be manipulative and deceptive. It is this that continues to make Indonesia the second largest smoking nation, allowing tobacco companies to have such a huge influence on Indonesian culture and lifestyle (Noviandari 2016). Design has a widespread reach and therefore designers have the power to challenge the values of their society, acting as an agent for change. It is important to be authentic in our work and look at both the intentional and unintentional consequences of the work that we produce. However, this form of design activism depends largely on our intrinsic values and what we deem as ethical and unethical. Ethical standards are very much determined by societal standards, and for Indonesia, the normalization of tobacco makes it more difficult for individuals to be an agent for change. Ross states that ethics is in the eye of the beholder and that ‘making ethical decisions is an opportunity to create community’(Ross 1991). The sense of community within smokers in Indonesia, which frames many social aspects of Indonesian culture (Ng 2007), leads designers in Indonesia to be actively engaged in designing for tobacco companies, without questioning their personal involvement.

The level of engagement tobacco companies have in the design and creative community has created a positive brand image, an idea evident in the ‘Go Ahead’ challenges for the tobacco company ‘A Mild’. In 2016 ‘A Mild’ held a design competition for a limited edition A Mild cigarette package (Astuti et al. 2018). The competition gained engagement with over 1 million Indonesians, responding by casting a vote from the selected designers (Go Ahead People 2016). The winning designer of this competition Leonard Theosabrata, a well-known young Indonesian artist, had his work used on special metal packs in August 2016 as part of a build-up to a concert (Review Rokok 2016).

The goaheadpeople.id website serves as an online brand community (Martínez-López et al. 2017), allowing registers to post creative works, vote in design competitions and share creative projects. The stakeholders even include the involvement of artists as mentors on the website, thus making an even more difficult landscape to challenge the normative ethics surrounding design and tobacco in Indonesia.

The Indonesian consumption of tobacco has been rapidly increasing over the years, with national survey data revealing that adult smoking prevalence is high, with 62% of males and approximately 1-3% of women smoking (Achadi et al. 2005).

The gendered nature of the tobacco industry is clearly evident as you walk through the streets of Surabaya and frames the social and cultural norms for women. It is traditionally considered culturally inappropriate for women to smoke. What I find particularly interesting is that smoking appears to be increasing among affluent and educated women in urban areas, such as Jakarta (Weinehall et al. 2006). Tobacco companies are capitalising on this by connecting smoking with symbols of woman empowerment and freedom. This tactic is reminiscent on the U.S, 1920’s  ‘Torches for Freedom’, when cigarette manufacturers turned smoking into a symbol of female liberation (Coca 2017). Indonesian culture is largely built on aspects of socialising which is built around tobacco culture. The gendered nature of tobacco dictates the way in which males dominate public spaces. On a local context, you can see many warongs filled with male patrons, sipping coffee and smoking cigarettes. This is reflective of Indonesian moral conducts where young women are not seen going anywhere alone and are not expected to engage in ‘free’ social mixing (Parker 2009; Smith Hefner 2009). On our guided walking tour we sat and enjoyed coffee amongst the locals at the warong, Warkop Sakam, advertised as being open 24/7. The guide, Anitha Silva, explained that “coffee and smoking go hand in hand.” It was clear that my presence as a female was uncommon, as there were no local females inside the warong. On our walk, I did not find any spaces for women to congregate and socialise in a group like men do inside a warong. This makes me question whether the use of tobacco-sponsored events, by providing safer spaces for females to socialise in public spaces, is reinforcing ideas in young women that they can buy freedom through tobacco?

Power structures of males over women are reinforced through tobacco as it dictates the use of public spaces, and Yuniyanti Chuzaifah, vice chairwoman of the National Commission on Violence Against Women, says that the country faces a street harassment epidemic, making it unsafe for women to utilise street spaces to socialise in the way that men do (Today Online 2017). An exploration of the Sampoerna Museum uncovered and highlighted the power dynamics between genders in the tobacco industry. As one looks down at the workers from a glass wall, with ‘no photo/video’ signs displayed, you can see all the women at their tables working quickly and efficiently to roll, bundle and package the unfiltered premium cigarettes. It is seen as an acceptable job for a woman to work in the production of tobacco, yet deemed as socially unacceptable and harmful to consume it. The irony is that the effects of tobacco does not discriminate based on gender and has lasting ramifications for those that choose to smoke as well as those who are exposed to it. 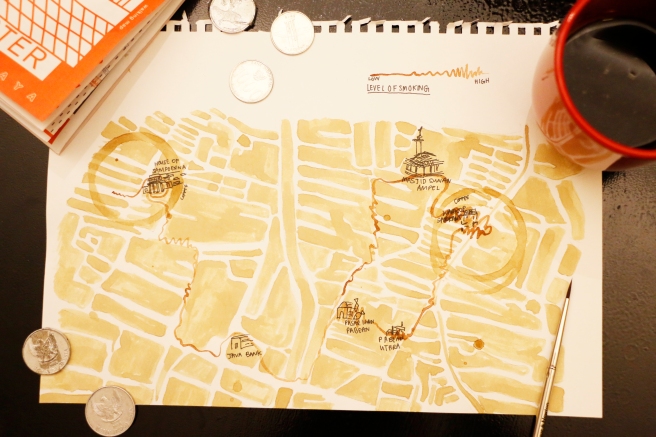 The map above explores the way in which consumption of tobacco differs accross one region. Notably, I found that markets with more female vendors, such as Pabean Utara, had less tobacco than markets with male vendors (Pasar Ikan Pabean).

In 2012 the English Department of Health designed a campaign called ‘Stoptober’, which focuses on the psychological principles underpinning tobacco use…

Studies reveal the effectiveness of mass media anti-smoking campaigns (Bala et al., 2008, 2012) and studies that compare different message types find that harm focused messages have a higher impact than those with an ‘anti-industry or how-to-quit-themes’ (Durkin et al., 2012). In 2012 the English Department of Health designed a campaign called ‘Stoptober’, which focuses on the psychological principles underpinning tobacco use, aiming to create a positive mass quitting trigger, an area which Durkin et al. (2012) shows there has been little research done on the effectiveness. The name itself, ‘Stoptober’, was designed to build engagement with the public through the association with other popular national events such as ‘Movember’ and to increase awareness on social media. The campaign was seen in a combination of traditional media such as TV, print, radio, online advertising and digital platforms such as Facebook and Twitter with the aim to create a social movement around a specific activity, stopping smoking for 28 days.

The main psychological principles which the campaign underpinned its components included:

The campaign used both top-down strategies, with advertising and public relations as well as bottom-up strategies, with its peer networking and support services. The results of the campaign show that more than 300,000 people took part in the campaign in 2012 and the overall estimate of past-month quitting was calculated to be 4.15%, being most cost-effective for the modal 35-44 year-old group, with an ICER (incremental cost-effectiveness ratio) of £414.26 (Brown et al., 2014). As a public health campaign, the cost-effectiveness of Stoptober compared favourably with other estimates concerning UK anti-tobacco campaigns. The effectiveness of the campaign is shown through its continuation since 2012 (Brown et al., 2014).

Some interesting strategies such as the motivational text messaging programme is a particularly effective strategy with teens, as revealed in the Swiss study ‘Efficacy of a text messaging (SMS) based smoking cessation intervention for adolescents and young adults’ (Haug et al., 2012). Unique to this study is the use of personalised messages that changes depending on the users’ personal traits over an extended period of 24 months.

The Stoptober campaign reveals the effectiveness of national campaigns based on psychological motivations through positive messages and social behavioural movements over the common fear strategies utilised in anti-smoking campaigns.