Food in Indonesia reflects the national identity and pride of the country. Each food practice signifies their richness in culture and conscientious awareness towards diversity, especially in differing religious beliefs.  Indonesians identify very closely to their ethnic foods as it is a significant contributor to their authenticity.

One of the many identifiers of the Indonesian food culture would the convenient and easy access to food. The traditional food service would be those served by kaki lima men whereby food is delivered through push carts. This is a familiar sight in villages and towns as they could be spotted in most corners of the streets. These push carts become the ‘sights and sounds of life’ (Cuture Shock, p52) in Indonesia as they are also known for passing local news and gossip whilst providing fresh and inexpensive food. 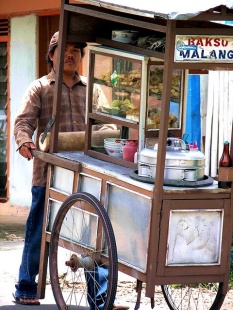 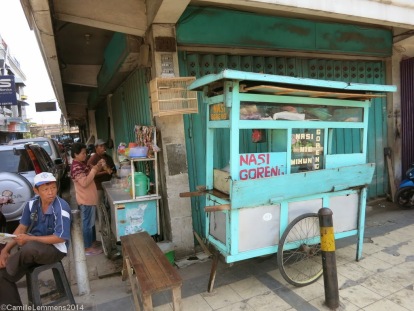 The variety and quality of cooked food is considerably a national asset that separates Indonesia from the rest. Both the ingredients and preparation of Indonesian cuisines are reflective of the various countries that lived in the archipelago through the centuries, these tastes were influenced by foreign inhabitants such as Chinese, Indian, Arab, Dutch and Portuguese.

Seriously, with all that mix, how could food not be tasty?

The principle of contrast is an aspect of Indonesian cooking that is one of its greatest appeals. Where there is spicy, is a cool contrast in the palate; this practice lends itself to an exercise especially with the multitude of courses when showcasing a wide variety of food.

Having such a variety of beliefs,  it is not surprising that the Indonesian culture has learnt to adapt to the ways of each entity. With Islam being the dominant religion in the country, it has become part of the culture and has effectively harmonised to their lifestyle. Despite being constitutionally recognised as a secular state, serving pork ‘should be on a separate table from the general buffet and never on the same plate with other foods’ (Culture Shock, p.61) if it is being supplied. It is also important to acknowledge the significance of serving certain food such as Ubi, which are root vegetables that includes cassava, sweet potato and taro. These crops obtains a cultural connotation of being a ‘poor man’s food’ therefore serving these to certain Indonesian guests would be discrimination; however it could be served as part of western meals.

It is impressive to witness the diversity in Indonesia and how the differences were utilised to authenticate such a rich culture.

In a country where creativity and resourcefulness overflows, it is not unusual to see a wide range of businesses throughout Indonesia; but in such abundance, how do these businesses cope with the competition? During Festival Mata Air, there were several local businesses that contributed to the festival markets; one of which was Terasmitra that was represented by two incredibly knowledgeable ambassadors, Sofia and Kiki. Terasmitra is an entrepreneurial platform for local businesses that represent four main categories in the creative industry, these are: craft, food, ecotourism and product knowledge.

Processed with VSCO with a6 preset

This organisation the Indonesian ‘home’ and platform to local entrepreneurs “who need to market their product”. Various events such as festivals and exhibitions enables this independent organisation to promote their partner’s products as well as the underlying values of inspirations within the products. Terasmitra further develops the products of these small community-based entrepreneurs following their beneficiary grant from SGP (Small Grants Programme) Indonesia, which is under the umbrella of the Global Environmental Facility. Their partnership with various businesses throughout Indonesia has allowed them to successfully contribute in protecting the environment through local solutions and involving the surrounding community. Sofia and Kiki both agreed that currently, the main environmental issues that the country is facing would be ‘trash and air pollution’; these are also the inspiration behind Terasmitra as it focuses on sustainability and developing local technologies that are environmentally profitable. The partners of Terasmitra have been precariously sorted out through various criteria such as the social and environmental significance of the product. Resulting from this, as Sofia explains, they ‘are able to maintain the ethical values of both Terasmitra and the partners & giving the consumers the peace of mind that the products aren’t just commercial products”.

One of the many advantages provided by Terasmitra is employment and the involvement of women in the working industry. Lawe Group is a partner that effectively exemplifies this, they are  a business who took inspiration from women and their concern to the dying existence of Indonesia’s traditional woven business. They aspire to bring ‘prosperity and economic wealth for Indonesian people’  through these fabrics that reflect their cultural richness. Kiki also mentioned that sewing is one of the major professions of women in this business however they are able to do their jobs at home, which also gives them the opportunity to stay with their family whilst earning an income to provide for them.

Terasmitra has definitely created a network of creatives who are effectively beneficial to the society, economy and individually. Sofia and Kiki’s knowledge about their organisation has truly reflected their passion to the cause, products and ultimately their ideological inspirations. 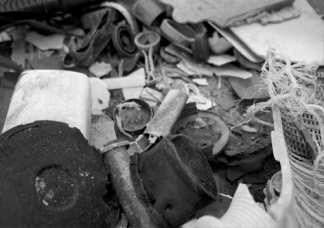 In a world that is constantly fed and effortlessly deceived by the market, it is easy to deviate from the effects of this behaviour to the natural environment. Post consumer waste and wrong disposal methods significantly impacts the both land and marine environments. Plastic waste is one of the major contributors of water pollution. According to CleanUp Australia, the estimated amount of littered plastic bags that enter Australia is around 50 million per year. Marine pollution is one of the biggest environmental concerns, both globally and locally, only 10% of Australians take their plastic waste for recycling. Vert Design, an Australian design house and studio practice responded to this issue through Ocean Collection which was produced in collaboration with a local designer, Emma Swann by up-cycling marine debris collected from the ocean shores.

Vert Design is a design studio that offers a range of services including collaboration with local designers to produce products that lasts and with limited environmental impact. This organisation has been independently responding to marine pollution for years and has experimented with low-pressure injection moulding which uses salvaged plastic waste to create new products; another of their other projects are injection moulded frames for glasses using waste plastic. In collaboration with Emma Swann and her local jewellery label Recreational Studio, they created ‘meaningful & timeless mens cuff design’ that is made from marine debris. Each cuff is comprised with inherent assortment of various polymer types and was shaped through low-pressure injection moulding that over-moulds the machine-cut brass.

Stemming from the waste-reversal aspect of the actual product, they decided to extend this to the packaging through utilising paper-pulp moulding. The final packaging design explored a wide range of processes and experimentations including the development of a system that could produce batches of pulp-formings using recovered junk paper. Both the packaging and the product effectively embodies the ideology of the brands which is minimal and displays environmental awareness. Vert and Emma evidently considered every small detail, from product production to the ink used for the packaging in order to further reflect the forefront principle of the project.

Ocean Collection is the product of an interdisciplinary initiative that successfully addresses and responds to an environmental issue. Both Vert Design and Emma Swann are independent organisations who inspires to generate durable products that would last over time with the smallest environmental impact. This design initiative naturally inspires and instil a sense of awareness and responsibility to the environment therefore contributing to the gradual rectification of the addressed issue.

Design is contextually shaped when various aspects are considered, such as the environment and the user. The Indonesian culture moulds the design context of the local designers which is evident through their design processes and solutions. The traditional art of decorating cloth called Batik and Pak Singgih Kartono, a local designer best exemplifies this notion as they are both majorly inspired and influenced by their culture.

During the studio, we were able to experience printing Batik and witness the manual intricate print process it undergoes prior the final product. Batik is a Javanese printmaking technique that utilises wax and dye to produce decorated clothing materials. This practice is part of Indonesia’s ancient tradition; therefore becoming a dominant part in their design making. In Architect Amos Rapoport‘s disseration Culture, Architecture and Design he states that “design needs to respond to culture” thus supporting the significance of culture to design; in order for a design to be effective, it has to suit the users and their environment. The interaction between the people and its environment is a pivotal aspect of designing in a culturally abundant location.

Rapoport establishes that cultural variables play a significant role in design; this notion is practiced by Singgih Kartono – a local designer, specifically in his village. Pak Singgih’s design philosophy is to sensitise us with nature with which he practices through his products. Traditional farming was the economic backbone of Kandangan; the government’s attempt to ‘improve’ their farming through unsuitable ‘modern’ ways severely damaged the community therefore impacting the villagers and their income. This resulted to the exploitation of Kandangan’s forest and nature, this action became an acquired behaviour therefore becoming part of their culture. The environment in this village has contextually shaped Singgih’s design practice where he developed a belief in creating a relationship between his products and the user through the materials he utilises. Due to the lack of cultural connection of the villagers to their natural resources, Singgih used this opportunity to reinforce the importance of valuing the environment and its uses. He believes that the relationship between his products and their user, reflected through the villagers and the mishandling of their natural resource,  could be more humanised through using a combination of natural materials to deeply involve the user to his products.

Indonesia is a creatively abundant country that was heavily influenced and inspired by their local culture and traditions. Both Batik printing and Singgih Kartono exemplifies the effect of local context in shaping the design, designers and their practice.