Andi Dwipasapya, born in Indonesia but now currently residing in Sydney, is an active member of the Indonesian Welfare Association. The purpose of IWA, and its importance to Andi, is its aim to provide services and support for not only newly arriving Indonesians, but broader members of the Indonesian community in Sydney’s metropolitan area. Emphasising the importance of IWA’s motto ‘from the community for the community’, Andi relates the significance of providing such support as a necessary tool for Indonesian cultural integration and preservation in the Sydney region.

Having moved from Indonesia 15 years ago, Andi understands the importance of maintaining traditional culture and practices for those new to the community. Recognising Australia as a proudly multicultural country, Andi believes it is important for such organisations such as IWA to keep a healthy relationship between “new Australians” and those born here. She does, however, reveal the benefits of directly working with newly arrived Indonesian’s due to her own cultural heritage. As Bird and Osland (2005) reveal, “when interactions involve people from other cultures, disagreements about how to work together are likely to arise” with Andi similarly explaining how the formation and management of IWA by local Indonesians has allowed an easier transition for those new to the community.

When asked about the programs, activities and events the IWA creates to help smothen the transition for newly arrived Indonesians, Andi asserts that although its primary focus is to help with integration, the IWA is also an important organisation for maintaining Indonesian culture in Australia. She then continues to explain that various activities such as information sessions, cooking and traditional singing classes are run by the IWA to combat feelings of disparity and disconnect that can arise from such a cultural change.

Andi acknowledges that the change in culture from Indonesia to Australia is quite significant. Drawing from her personal experiences, the primary struggle for most Indonesians new to Australia is the language barrier. Secondly, Andi reveals that the religious change, particularly that for practicing Muslims has a significant impact on newly arriving Indonesians, and still so for those within the Australian – Indonesian Community. In discussing these major changes, specifically in regards to Religion, Andi introduces the most significant alteration, religiously, is the practice of Ramadan. Andi reveals how Ramadan in Indonesia is all encompassing as the predominant faith of the country. Ramadan in Indonesia, she explains, is something that engages the entire community, with loud drums in the morning and at dusk everyday. She does lament the sense of unity and community during Ramadan that is consequently lost in Australia, as most Muslims practice “silently”. It is a topic of discussion that the IWA is constantly engaged with as a pivotal part of cultural integration and understanding in Australia.

­Having concluded this interview, I am eager to see how, after discussing the change Indonesians feel when moving to Australia, of the effect our trip to Indonesia will have upon me. I am anticipating a much greater sensitivity to those who have moved to Australia, leaving a strong sense of culture and community in their homeland despite the efforts of such organisations as IWA.

Context is an undeniable force impressing cultural, social, political and environmental values into any given medium. Specifically for design, the role context plays globally has allowed for an extremely diverse, interactive and expanding industry to flourish within specific cultures. It can be seen therefore that design and context have a symbiotic relationship whereby context can be shaped by design, and design be dictated by context.

An example of this symbiotic relationship between design and context can be observed in Indonesia’s ‘stiker kota’ or city stickers. These small, individually designed stickers have become a means to both circulate topical political, cultural, religious and social conversations as well as to act as a medium to communicate free speech and public opinion. Farid Rakun reveals that Indonesian designers, although tending to remain anonymous, have the power to ‘mediate public opinion’ and surface tensions within the community (Rakun, 2014). It is evident in this case, that the changing political climate of Indonesia has shaped both the designers content and purpose for creation. Design in this context has become a tool for grass root level communication between the public and the government.

It is also important to note the specific context to which these ‘stiker kota’ emerged. Originally printed by AMP in 1977  (Adi Mas Putra – little brother, big brother and son), founder Kusandi essentially created a company to which birthed modern day urbanisation in Indonesia (Rakun, 2014). With the company spreading, villages were able to link their communication systems and thus the gradual urbanisation of broader Indonesia. Without this linkage, the product diversification of AMP would not have expanded, resulting in the ‘image-crazed society’ of Indonesia that fostered a demand for local design production (Rakun, 2014). It can be seen here of how design was directly dictated by an urban context.

Through an observation of the ‘stiker kota’ movement in Indonesia, it is clear that design, in this specific context, is a means for political and social communication. These stiker kota designs, therefore, have a much deeper meaning beyond surface appearance. Given the social context of urbanisation and an expanding need for cross – political conversations between the government and their people, design has become a means of mass communication and public expression. It is necessary for the designer to adopt these expressions and produce based on the reception of each design and the popularity it gains. Consequently, it can be seen on this micro level, of how design can serve a different function, purpose and role depending on the given context. 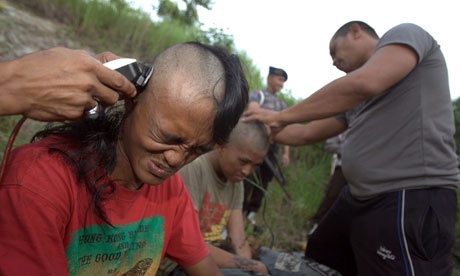 The birth of punk lifestyle in Indonesia by the mid 80’s can be seen as a direct response, although gradually built, to the strict governing of citizens in the sharia province of Banda Aceh. As the only province governed by Islamic law, it is interesting to note the “entangled and contradictory processes” to which the extreme westernised lifestyle of punk emerged in the polar opposite climate of strict religious culture (2014, Martin-Iverson). But of most importance to note is that the adoption of punk culture in Banda Ache specifically goes far beyond a mimetic relationship to Western scenes (2014, Martin Iverson). Instead, it is used as a tool by Indonesian youths to escape strict political law, an escape from what they considered a completely encompassed society of religious dominance. To them, punk is not just a fashion statement but a medium to express as a basic human right, aligning Indonesian punk with a much broader definition than it does in other places of the world (2012 Schonhardt).

The intensification of these conflicting ideologies came to a breach in December, 2011, when sharia police arrested 65 punks at a charity event under claims they did not obtain a permit. The arrest made public, both nationally and internationally, enforced the governments view that the punk lifestyle was a social disease that should be extinguished from the community of Aceh. These ‘punks’, detained for ten days, were made to shave their heads, complete physical training and were forced to pray in an attempt to crush these ‘outlaws’ and publicise punk as haram. Such extreme punishment did not go unnoticed and it can now be better understood, 4 years on, of the social and environmental context that birthed such reprimand.

The Tsunami of 2004, heavily affecting the country of Indonesia, saw an immediate strengthening of the people’s faith in Allah. Specifically in Aceh, the Baiturrahman Grand Mosque, despite its grounding on sea level, served as protection to many in the local community as they emerged unharmed after the disastrous waves that destroyed the surrounding community. Many Indonesians saw this as a sign from their God, and immediately strengthened their devotion to Allah. This consequent devotion saw not only the strengthening of such religious laws, but essentially fostered the entire communities adherence to sharia governing the province. The consequent repression of the punk lifestyle, accumulating to the arrest in 2011, can now be better understood by a community bound by a religion that has helped to overcome the trauma and devastation of the 2004 Tsunami. Those individuals who have chosen to adopt the punk lifestyle are seen as making a direct insult to Allah, who to them, has granted life and safety from natural disasters.

Now better understood with environmental, social, and religious contexts in place, it can be seen of how cultural identities within Aceh run on two different, all encompassing streams. Although polar opposite, both punk and sharia communities identify the desire Indonesian communities have for a sense of belonging, of banding together as large families – although this is ironically revealed through a major clash of minority and majority social groups.

As human beings of the technological age, it is fair to say that waste management and the management of food preservation has been developed to such an extent that it is now a process nearly entirely dependent on technology. The contradiction in this fact, however, as Korean designer Jihuyn Ryou highlights, is that mankind has forgotten a most obvious factor when it comes to natural food preservation – the fact that as a living organism its existence should remain within a natural, not technological, environment. As the world grows alongside developing global issues such as waste, over population and poverty, society has often looked to its most powerful force – technology – for the answer. However when it comes to waste management, has the answer been aligned with traditional food practices all along?

On average, globally, an everyday household wastes close to 30% of its food through a misuse / misunderstanding of proper preservation (UNEPF 2011). Ryou calls this a ‘blind trust’ that mankind has developed in technology, specifically the refrigerator, in which a lack of observation and knowledge of food has led to an increase of food waste in the 21st century (2009). By studying traditional food preservation through oral tradition, Ryou has developed her ‘Save Food From the Fridge’ initiative to which specific foods are given a more suitable and sustainable means to exist in the everyday household. Her project serves two purposes, one being to save food from being wasted, and the other to save food from loosing its nutrients through correct preservation. Ryou highlights a laziness that general society has adopted towards food due to its abundance in first world countries, compared to the thorough management and observation of food in olden times that was necessary for survival.

In designing ‘Save Food From the Fridge’ Ryou has cleverly considered the creation of physical objects as a means to bring back a closer relationship between food and people. She looks into the symbiosis of potatoes and apples in a dual storage system whereby an understanding of the emission of ethylene gas from apples helps to prevent the sprouting of potatoes.

In another design, Ryou creates a simple, beautifully designed storage system for root vegetables, in which keeping roots in their natural, upright position allows the organism to re-align with its original vertical development, preserving more energy and keeping appropriate humidity placed in moistened sand.

Finally, in what now seems a most obvious management for eggs, Ryou has constructed a storage shelf where eggs may remain in natural air, free from absorbing the smells from refrigeration through their millions of surface pores with an additional glass for testing the freshness of the egg.

It is clear to see that Ryou’s simple realignment with traditional food preservation can make quite a drastic change on the preservation and management of food. By taking the time to observe the natural being of such foods, mankind would benefit not only from the duration of purchased goods, but also from an improvement of taste with nutrients thriving in their natural condition. Check out her blog to see more of Ryou’s ideas and to communicate with like minded people across the world deterring from techn­ology and re-aligning with traditional methods of food preservation: http://shareyourfoodknowledge.tumblr.com/

Tedx Talks – Jihyun Ryou on ‘Save Food From the Fridge’ 2012