Design draws from its surroundings; its function is completely dependent on context which is a complex mix of culture, time and place. Local context is a more direct combination of political and social influences specific to a time and place. Doing the studio in Banjarmasin, and visiting Java and Bali afterwards was a fascinating insight into a country that has so much diversity in religion, culture and ethnic groups. A focal point was understanding how this multiplicity and unity must be negotiated internally and as a collective, especially among Indonesian youth and their socio-political organisations and subcultures.

Indonesia is highly urbanised and operates around the cycle of consumerism that has become associated with modern life. This has only really developed in the past 20 years, after the fall of the authoritarian Soeharto regime in 1998. Combined with the flood of changes from globalisation and the internet, the country went through enormous changes and its design culture has been constantly trying to find and reaffirm the characteristics and definition of ‘Indonesian design’. (Luvaas, 2009) Part of this exploration was the DIY movement that grew in reaction to the saturation of mass-market global culture and its products. Indonesian youth culture flourished in the 2000s with this low-fi, punk sensibility across design, art, fashion and music, which has left a major impression on cities such as Bandung and Yogyakarta. (Luvaas, 2009) Reclaiming modes of production by reverting to handmade goods with smaller runs is a common feature of punk and anti-resistance movements the world over, as self-publishing gives one greater freedom of expression. (Moran, 2010)

Though that was an example of a reaction against the changing context, the local and global context we are simultaneously situated in can both be a source of inspiration for design. Architecture and furniture design is being experimented with by many Indonesian designers, such as Alvin Tjitrowirjo, whose contemporary furniture incorporates Indonesian culture through the materials used and is exhibited internationally. (Emond, 2010)

Design’s ability to change the physical, and thus the emotional world makes it uniquely poised to react to and influence the state of affairs, through subversive art, music, fashion, and architecture.

After the first week of our studio in Banjarmasin, I was still trying to understand the attitudes and behaviours tied to smoking, especially among the youth. Dylan Albrecht and I conducted an interview with Dina Ferdiana, a 2nd year university student studying primary school education. We conversed with her about her personal experiences and opinion of smoking, and how actions might be taken to combat it.

Dina was well educated on the toxic effects of tobacco consumption, referring to a local anti-smoking TV ad where a laryngectomy patient was recounting her experience of smoking and cancer. This may have been the same campaign Vital Strategies launched, as the ad was screened across Indonesia and other countries. She also stated that most Indonesians were also well aware of the harmful impact of smoking, for themselves and those around them. There are no smokers in her household, but she talked about the prevalence of youth smoking as many boys from her high school started smoking when they were fifteen. She attributes this to peer pressure, stating that friends would try them together and this would become a habit due to the “good taste”. (Ferdiana, pers. comm., 2018) A report on youth smoking in Java also attributes the prevalence of youth smoking to cigarettes being part of social interaction and events; conveying cultural ideals of masculinity as male elders smoke and a sense of camaraderie is created. (Ng et al, 2007)

This correlates with other interviews my group conducted for our billboard project, where interviewees who had tried cigarettes did so in social settings. However, many of them did not like the flavour and sensation of smoking, and joined the burgeoning anti-smoking movement in Banjarmasin. Dina also commented that the number of smokers is declining, suggesting that the growing anti-smoking sentiment across Indonesia is making an impact. When asked how this change might be improved and expanded, she spoke about the government’s need and responsibility to regulate tobacco advertising and sales for the health of the country – smokers, non-smokers and especially children. (Ferdiana, pers. comm., 2018)

Considering the complexity of the tobacco industry and its network of consumers, producers, and suppliers, government control is certainly part of the solution but also the problem. (Astuti et al, 2017) The economic interdependencies that tobacco companies exploit and thrive on, such as making up the majority of sales for independent vendors and being the biggest source of revenue and jobs for the country, makes it a difficult issue to navigate and tackle. (Danardono et al, 2009)

Astuti, P. A. S. Freeman, B., 2017, “It is merely a paper tiger” Battle for increased tobacco advertising regulation in Indonesia: content analysis of news articles’, BMJ Open, vol.7, no. 9.

Tobacco advertising capitalises on the constructed perception that smoking is empowering and glamorous. These connotations are reinforced and recontextualised to sell their product across different demographics, including counter-culture groups. The mystery and glamour associated with cigarette consumption is reworked into ideals such as independence and emancipation through advertising imagery and language, which makes its way into popular culture film, music and other consumable content. (Quinlan, 2016) For example, cigarettes were marketed as ‘torches of freedom’ to women amidst the popularity of the women’s rights movement. (Lee, 2008) For the LGBTQ demographic, smoking was advertised as a liberating choice and became a pervasive part of queer party culture. (Agnew-Brune et al, 2014)

A 2016 NSW campaign discouraging smoking as a part of queer culture and its community is #SmokeFreeStillFierce, which is run by the NSW government LGBTI health organisation, ACON, and specifically targets lesbian, bisexual and transgender women. It was based on research conducted by ACON and the University of Sydney into the smoking habits of LGQ women and how they differed from straight current and ex-smokers. Tobacco use is generally not acknowledged as a major queer issue, even though statistics show that there is a disparity between LBGT smokers and non-LGBT smokers, especially among youth. (Malone et al, 2008)

Infographic on Tobacco use and awareness in the LGBT community (LGBT Health Equity, n.d.)

Today, American LGBT adults are smoking at a far higher percentage, at 20.6% compared to the 14.9% of heterosexuals. (Truth Initiative, 2017) There is also the possibility of increased health risks for this demographic as HIV-positive people are more susceptible to thrush and pneumonia infections, and trans women undergoing hormone therapy are at greater risk of developing heart and lung cancer if they smoke during the treatment. (Quinlan, 2016)

The campaign is largely run through social media and the sharing of digital content, including short videos, personal interviews and downloadable resources to assist with quitting. They also organise events and online interventions, which focus on the sharing of stories and community driven aspect of the organisation.  It takes much more of a positive, light-hearted approach than is typical for anti-tobacco campaigns, which reflects the demographic they are speaking to. It is also designed to make cessation a more open, supportive experience by encouraging conversation and the sharing of personal journeys, as their research showed that most were well aware of the health risks of smoking but found little motivation and support in the heavy imagery and shock-tactics of most anti-smoking campaigns. (Wade, 2016) 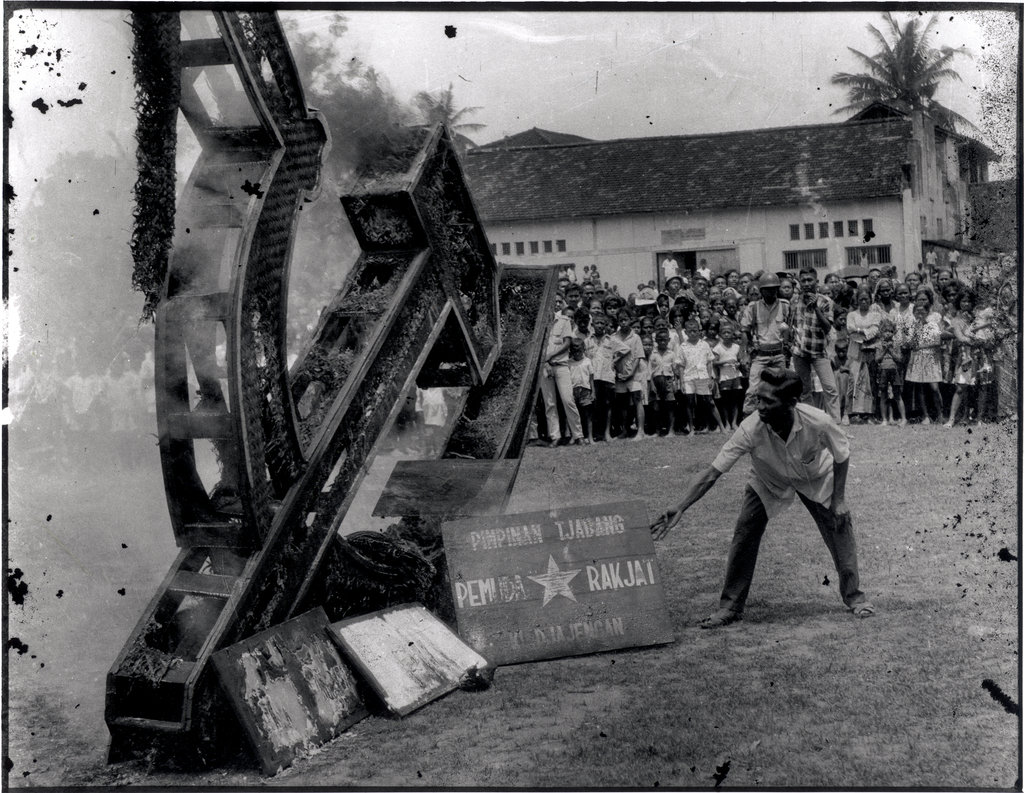 Anti-communist sentiment in Indonesia during the Cold War resulted in purges and massacres.

As a densely populated, diverse collection of cultures, land masses and people, Indonesia’s collective identity is something that has been fashioned and moulded by its expansive history. Of this, the more recent Thirtieth of September movement and the anti-communist killings of 1965-66 that followed invite provoked further research and analysis into how its effects are still felt and perceived inpresent-day Indonesia.

In the midst of the Cold War, Indonesia’s communist party was the third largest in the world, after China and the USSR. (Associated Press Jakarta, 2017) However, there were internal and external powers that felt threatened by the encroaching threat of communism. With the backing of Western capitalist states such as the US, UK and Australia, (Hawley, 2016) the Indonesian military staged a coup in 1965 that established an authoritarian state under President Suharto. Once in power, he ordered the political genocide of Indonesian communists, and the purging of communist materials and artefacts. (Pohlman, 2014)

Propaganda played a big role in manipulating public opinion and prejudice, the messages of which are still prominent as the highly-skewed and violent films were mandatory showing in classrooms during Suharto’s control. (Cribb, 2015) This fuelled the anti-communist sentiment that underpinned the massacres, as the orders were executed by the military and civilian groups who trained under them. Even today, the genocide is not acknowledged with the respect and honesty owed to its victims, and much of the media or events that attempt to address it are met with censorship.

Probably the most well known is The Act of Killing (2012), a documentary by American filmmaker Joshua Oppenheimer. He constructs the film as a blend of genres, and it sits somewhere in-between reality and cinematic make-believe as the real gangsters and murderers of the 1965-66 killings are invited to re-enact their crimes in the style of Hollywood films. This gives a shocking and compelling insight into the justifications made for these atrocities, as they are even regarded as national heroes and face no sanctioned punishment and little remorse. (Roosa, 2016)

The current Indonesian government has taken minimal responsibility for its bloody origins and gone so far as to prevent cinemas from showing the film, and crackdown on private screenings. (Pamuntjak, 2015) The lack of openness and transparency surrounding one of the worst breaches of human rights in the 20th century makes it confusing and difficult for Indonesians to make sense of their own history and collective national identity.

Cribb, R. 2015, ‘Behind the coup that backfired: the demise of Indonesia’s Communist Party’, The Conversation, 30 September, viewed 7 December 2017, <https://theconversation.com/behind-the-coup-that-backfired-the-demise-of-indonesias-communist-party-47640>.