The Indonesian political climate has long been overshadowed by the corruption, threats and fear of the 1965 military coup as explore through Joshua Oppenheimer’s 2002 documentary ‘The Act of Killing’. The Oscar-nominated film follows death squad members, Anwar Congo and Adi Zulkadry, in the present day as they relive their actions cinematically as anti-communist gangsters. In doing so, the director tried to show the ‘humanity’ of the killers and give insight into their somewhat misguided attempts at patriotism in 1965.

‘The Act of Killing’ Trailer

Anwar Congo, a man who is sympathised in the film despite the fact he is ultimately a mass murder, is characterised by Oppenheimer as a soldier at war. He takes little responsibility for his actions during the coup, when an estimated 500,000 to 1 million “communists” were killed (Kwok, Y. 2015). To distance Anwar Congo from his actions, these victims are dehumanised in the film, and in his own consciousness, leading the killer to describe throwing bodies into the rivers “like parachutes” (Oppenheimer, J. 2002). He even goes so far as to claim “deep inside I was proud because I killed the communists” (Oppenheimer, J. 2002), highlighting his soldier mentality.

Oppenheimer also uses an unexpected mix of genres to create a disjunctive narrative form that keeps the audience unsettled. It “blurs the good vs evil narrative” of the film and of the lives these subjects are living (Bjerregaard, M. 2014). The director strives to create a sense of sympathy for the murderers who at this time in history were being “championed as national heroes” (Zelenko, M. 2015).  It is in this way that it becomes clear to the audience that there are two sides to this history and, while they were wildly mislead by their government during the military coup of 1965, Anwar Congo and his associates did not necessarily realise the full extent of their actions at the time. It is only towards the end of the film that these anti-heroes begin to feel some remorse stating that they are “sometimes haunted in their dreams” (Oppenheimer, J. 2002).

‘The Act of Killing’ was a highly controversial release and elicited mixed responses because, as described by Bob Mandello, Oppenheimer’s work was “a virtually unprecedented social document” (Zelenko, M. 2015). Personally, I align myself with one viewer who, when the film was released, expressed that “I hope Joshua goes all the way with this film… then the government of Indonesia may be forced to deal with human rights” (Bjerregaard, M. 2014). In addition, I think it is important that the country recognise their history in order for “younger generations [to] build a society with values far different” from the one expressed in the film (Bjerregaard, M. 2014).

All works of art are used by the artist to non-verbally communicate with their audience and street art is no different. A number of organisations use murals to encourage social change in certain environments. The Porch Light Program, run by the Department of Behavioral Health and Intellectual disAbility Services, in Philadelphia does exactly this by using murals to open up topics such as mental health and substance abuse for discussion (Mural Arts Philadelphia, 2016). They believe “hands-on-art-making provides a strong pathway for individual and community healing” (Mural Arts Philadelphia, 2016) and a study by the Yale University School of Medicine proves exactly this.

What is Porch Light? Video

The project within the Porch Light Program that links most to Australian culture is The North Philadelphia Beacon Project which tried to tackle alcohol abuse in the North Philadelphian neighbourhood. It consists of two murals with the words RISE, standing 40 feet high, and SHINE, standing 80 feet high, painted over a colour grid of volunteers’ portraits at 2710 North Broad Street. Artist James Burns worked in conjunction with community volunteers and the Sobriety Through Out-Patient (STOP) organisation to create a work that positively addressed addiction and recovery. Burns hoped that this would act as “a reminder to value each day, and remind us that we are a community of individuals, each with a voice and power” (Burns, J. 2013).

The study by Yale University School of Medicine proved that this type of community mural can have a positive effect on a neighbour when asking “can public art promote public health?” (Kraemer Tebes, J. 2015). A group of researchers lead by Jacob Kraemer Tebes, PHD, and Samantha L. Matlin, PHD, looked at the effectiveness of the Porch Light Program on individuals and communities throughout Philadelphian neighbourhoods that exhibited these murals. Their research showed that while there was limited change for some individuals, there was certainly a clear change in the community as a whole making a design initiative such as this highly successful (Kraemer Tebes, 2015).  While they specified that “the mechanism that explains how public murals lead to these outcomes remains unclear” they strongly acknowledges that “the defining impact of the public murals may be that they serve as a catalyst for social change” as explained in the diagram below (Kraemer Tebes, J. 2015).

A design initiative such as the Porch Light Program in Philadelphia is used to address issues within a community and open up taboo subjects such as mental health and substance abuse for discussion in the hopes of “mobilizing residents for community change”(Kraemer Tebes, J. 2015). The project has been very successful as verified by a Yale University School of Medicine study.

While working on the ‘show your true colours’ anti-smoking campaign with Vital Strategies, I was instantly exposed to a clear information gap that seemed to occur in Indonesia. The government appeared to be on one side and a sector of the population was on the other side, without all the information. Looking further into this obvious miscommunication, I spoke to a local that had been living in various parts of Yogyakarta for the past two years. Benk Riyade is an artist, activist and trombone player originally from Surakarta.

Initially, I started to ask Riyade about his thoughts on smoking as he was not linked to the work we were involved in as an activist with vital strategies. Instantly he condemned smoking, expecting that was what we wanted to hear but as we got further into discussion it became clear that he did not fully understand the negative consequences of cigarettes. He “only smokes kretek (clove) cigarettes [as they’re] made in Indonesia”, clarifying that this meant they were good because “they stimulated the economy and helped out Indonesian families” not foreign companies (Riyade, B. 2017, interview, 3 February). Riyade also stated that children shouldn’t smoke is because it is a financial drain on the company but “if they live in the mountains, it’s acceptable due to the colder temperatures” (Riyade, B. 2017, interview, 3 February). Whilst some of these statements is not strictly incorrect, they’re wildly misleading. This proves that while the government may not necessarily be sharing entirely incorrect facts with its population, it is certainly not enlightening them with a truthful and well-rounded understanding of the dangers of smoking.

During his time in Kampung Kali Kode, Riyade was working on a mural that explored the political climate of Indonesia. He was very passionate about educating the working class on their position in the country and the power they could have should they be properly represented in parliament. Riyade was very passionate about democracy and was strongly against the pseudo-democratic dictatorship that left “the average Indonesian with no rational alternative to the status quo” (Bjerregaard, M. 2014).  He said he wanted to “make the community realise that the community is the backbone of the country, especially workers”(Riyade, B. 2017, interview, 3 February). It is in this way that Riyade ironically began to share his own distaste for an uneducated information gap that seemed to be occurring between the parliamentarians and the working class in Indonesia.

It was only while talking to this Indonesian activist that I began to realise this lack of shared knowledge spread far beyond the realm of an anti-smoking campaign. There appears to be a lot of misleading information as the government takes advantage of their power and their lesser educated population.

Often, design initiatives are not necessarily linked to designers, artists or organisations in an official capacity. There are many contexts where people create art but instead of calling themselves designers or artists, they more closely identify with activists. This is most often the case in places that are somewhat politically unstable. Countries like Indonesia and Italy share this sense of disillusionment when thinking about their governments. Locals use graffiti and street art as a form of expression to fight the political climate of their countries. While these people are inspired activists, they ultimately design every aspect of their work.

Huffington Post. 2013, ‘What kind of values are we going to inherit?’.

During a recent trip to Indonesia, I discussed the national politics with a local artist and activist from Surakarta. Currently living in Yogyakarta, Benk Riyade shared his work with me, highlighting the power of art’s ability to question society norms and educate the masses in an informal environment. Riyade was working on a mural under the bridge in Kampung Kali Kode. He (Riyade, B. 2017, interview, 3 February) wanted his work to educate the working class about Indonesia’s current political climate.

Whilst Benk Riyade’s work is considered street art, a form of creativity that is often criticised by heavy weights in the fine arts world, it is ultimately an expression of skill and imagination. When asked he (Riyade, B. 2017, interview, 3 February) agreed that he was an artist, but only as a product of his real work which was education and, in my opinion, activism. 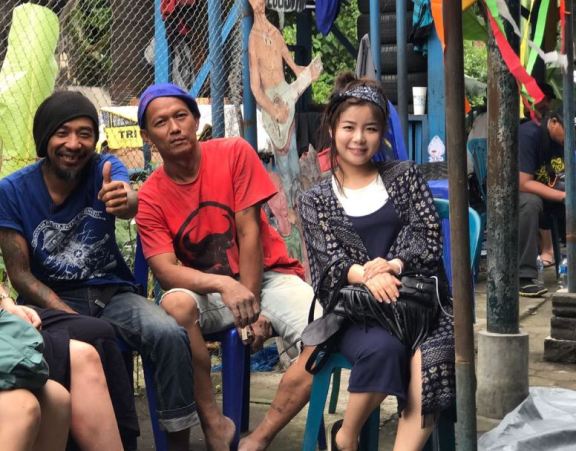 While on an overnight trip to Genova, the amount of politically fuelled illegal graffiti was astounding. At this time, Italy was struggling with the influx of refugees from Syria with 262,482 recorded refugees in 2015/16 (Clayton, J. 2016). Each of these street artworks was carefully curated and designed by anonymous activists to send a message in support of or in opposition to current governmental foreign policies. One of the most significant artworks was of a 23-year-old Italian boy, Carlo Giuliani, who, during a G8 protest in Genova, was shot by police (Boschi, F. 2016). The instability in the area which allowed for events such as this to occur left many outraged and distrustful, leading some, like the artist of this particular portrait, to channel their activism into street art by reminding officials of their past mistakes.

The power of Riyade’s work and the anonymous street art is in the design, allowing these artists to communicate their ideas with the wider public through a non-verbal means. Each expression of activism is carefully designed to ensure that they affect their audience in the way that they were intended to.

Other Articles of similar Interest – The Porch Light Program