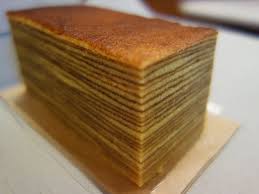 I met up with my friend’s mum, Marina, to see what she could tell me about life in Indonesia and about Indonesian people. She greeted me with Indonesian layer cake and tea just to set the tone. Marina was born and raised in Jakarta and left at the age of 13 to come to Australia so that she could have a ‘western education’. She’s been going back almost every year since and said she has seen it change dramatically over the years. The most notable change she mentioned was that Jakarta seems to get busier and more chaotic every year. ‘I don’t know if it’s that I’m too old now but last time it was bustling and overwhelming’ she told me, whereas when she left if was ‘like a village in a city’. Not surprising she felt that way when the estimated growth rate of greater Jakarta is 3.6% p/a- over double the growth rate of the rest of Indonesia, and when Indonesia is the world fourth most populous nation (Firman, T. 2011)

She talked about how Indonesia was multi faceted and layered due to the many religions, languages and ethnic groups, of which there are over 719 and 360 respectively, that to try and understand it is a large feat (The Road Ahead, 2014). I found this fitting as I scoffed down my layer cake while she advised me that ‘you have to experience it to try to understand the complexities’. I asked her about the tension and animosity between the groups that often occur with the melding of cultures. She informed me that there ‘is little conflict beyween ethnic groups’ and that ‘Indonesian are very patriotic and loyal of what is now united Indonesia’. When I told her that I found this surprising due to the massacres around 1965 and their current conflict in the Papua region (More Religion, More Trouble, 2008) she stated that ‘political conflicts were more prominent than cultural ones as central government takes a lot of the resources’. Lack of a welfare system, high levels of corruption and political instability are the main challenges that Indonesians face according to Marina. ‘The possibility that tomorrow there may be a coup’ is so deeply ingrained in their psyche that many live day to day. She believes that corruption is now a big part of their culture that not only is it too hard to remove, but that its accepted that “if you don’t play the game you cant exist’.

What she loves most about Indonesian culture however, is the strong sense of community and family values. She believes that the value of maintaining harmony between the community and the low sense of individualism held by Indonesian gives them ‘warmth and no one ever feels isolated’.

An estimated 52% of Indonesia’s 175million population live in urban areas, of which an estimated 60-80% live in makeshift kampungs that provide affordable shelter in urban areas (The World Bank Group, 2015). Originally the term kampung meant village, yet with rapid urbanisation it has now come to mean a neighbourhood contained within a city (McCarthy, P. 2003). Design of kampungs are often haphazard and the lack of private space and infrastructure see things such as bathing, washing, cleaning and cooking facilities being shared by multiple families in public spaces (Rahmi, D. H. et al 2001). While stemmed from necessity and lack of alternatives it is arguably due to traditional principles held by Indonesians such as ‘gotong royong’ that these shared spaces and facilities can effectively be shared between so many people. The principle gotong royong, which is loosely translated to ‘mutual and reciprocal assistance’, is the philosophy that collective social activities and collective life are of high importance (Bowen, J. 1986) A study of the Ratmakan kampung in Yogyakarta found that flexible private and public spaces for multi-purpose uses, which were constructed using local materials and techniques and voluntarily maintained by all the residents, enabled the effective use of minimal spaces and resources in the kampung.

While the design of these spaces may work in Indonesia in the context of Kampungs, collective ideals are less evident in western societies, including Australia, where a more individualistic approach to living is the norm. There are however some that are exploring the idea of collective living. A shift in perspective and movements such as ‘collaborative living’ and ‘co-housing’ are seeing this adoption of shared resources exhibited in kampungs become increasingly popular. In Australia cohousing initiatives such as ‘Honeyeaters Community’ in Gloucester NSW, sees eight families share communal facilities such as workshops, gardens, social areas and guest housing (Co-housing Australia n.d.). While collaborative housing option are limited to rural areas of Australian, ‘Copper Lane’ in the Hackney London, claims to be the first urban co-housing scheme, where six families share resources from spaces including the laundry and workshop ,to appliances such as vacuum cleaners (Waite, R. 2014) The rise of what Rachel Botsman has termed ‘collaborative consumption’ sees a growth of sharing resources enabled through the use technology. Successful collaborative consumption organisations include Air bnb, go-get and airtasker, where accommodation, transport and skills are shared (Botsman, R. 2010)

With increasing strain on resource and lack of affordable housing options in urban areas designers may be inspired to create urban spaces, housing options and products with the gotong royong values and the ability to share in mind in the future.

The film The Act of Killing gives the viewer an insight into several issues in Indonesia, both past and present. While the film mainly focuses on the mass murders that occurred between 1965-66, after the military overthrew the then government leading to the execution of an estimated 500 000 “communist”, it also provides an insight into how the country is currently dealing with those murders and the ongoing corruption of the same government which remains in power. While the film focuses on a few of the paramilitary leaders and gangsters responsible for the murders and their stories, it’s the glimpses of the Indonesian peoples reactions that seep through that are the real insightful, interesting and true focus of this film for me.

Gangster and paramilitary leader during the 1965-66 murders, Anwar, is one of the executioners the film focuses on that was asked to create a re-enactment of his executions. In the filming of his re-enactment the actor Suryono, who plays the communists, tells Anwar and his fellow executioners of when he was 12 and his Chinese stepfather was abducted then executed. Suryono claims he’s telling them not to be critical but rather because he wants them to have input for the story. You assume that he says this because of the fear these paramilitary leaders still hold in Indonesia. It’s Suryono’s genuine anguish and trauma when acting along with his reaction to when the executioners admit their re-enactment will disprove the propaganda of the communist being the cruel ones, that’s one of the glimpses into the Indonesian people true reaction that makes this film bearable.

Suryono with executioners (The Act of Killing 2013)

Same again when fellow executioner Herman re-enacts his scene that the actors, including his own daughter and an elderly women, are clearly distressed post filming that you further realise how traumatic these events still are for Indonesians.

In the film Anwar’s fellow executioner Adi states ‘we were allowed to do it and the proof is we were never punished’ validated by the fact that the government is still in power providing these perpetrators with continued protection and immunity. Contrary to what seems to be the fitting treatment for them, they are interviewed and praised on Indonesian National Television. While onstage everyone seems to be glorifying their behaviour, it’s the reaction from the staff backstage, who question how one can kill over 1000 people and still sleep at night, which may be a more accurate representation of Indonesians feelings towards these murderers. Along with not being held accountable for these murders the film shows how movements such as the Pancasila Youth movement still have ties with the army, police and the government and how these ties enable corruption within Indonesia.

Apart from using films that Anwar and Herman love as inspiration for their re-enactments of the story, it still remains unclear to me the connection between scenes such as when Herman’s in drag or when Anwar is in the jungle dressed as a cowboy, and the real occurrences of the death squad. To me providing them with a platform to re-enact these scenes, dressed as stars they admire and in the style of Hollywood megapics, seems to further enable the farce that continues around this topic and doesn’t do anything to reconcile the past. Glimmers of remorse squeeze through occasionally throughout the film, namely from Anwar towards the end, yet they seem to revel in the retelling of these stories and in the ability to become not only “stars” but also directors.

On seeing his re-enactment, Anwar states ‘it’s a good family movie, plenty of humour, wonderful scenery…even if its about death’. Its unclear if its delusion or denial that guide the main character’s re-enactments, or just the desire to craft a good story.

It’s no revelation that waste is a ongoing problem that is damaging our environment and in turn our health and well being, yet levels of waste generation are steadily increasing.

Factors such as economic development and rate of urbanization influence the amount of waste produced, with higher income generation correlating to a greater amount of waste produced. Urban residents produce approximately twice the amount of waste as their rural dwellers. By 2025 it is predicted that 4.3 billion urban residents will generate approximately 1.42 kg of waste, per capita, per day (The World Bank Group, 2013). The volume of waste generated per person almost doubled in Australia as it increased from 1,200 kg to 2,100 kg between the period of 2001- 2007 (Australian Bureau of Statistics, 2013). People of high incomes produce 46% of global waste, as opposed to lower income levels which produce 6% (The World Bank Group, 2013).

It is often however these people of lower social economic levels that resort to becoming “waste pickers”, as a way of earning an income to support themselves and their families, that are reducing the environmental impact of waste by collecting, sorting, recycling and selling these materials from municipal dumps and landfills worldwide, performing between 50 and 100 per cent of waste collection in most cities in developing countries, (Dias, S 2012).

One initiative that is using these recycled materials is Ffrash who purchase raw materials from “scavengers and fisherman” who source these materials from various garbage dumps in and around Jakarta. Ffrash is a non-profit organisation started by Dutch designers that seeks to make ‘high quality, sustainable design furniture and home interior products from Indonesian trash’ (Ffrash 2015).

Along with up-cycling these materials to reduce the impact on the environment, the design initiative also provides a secure income for the “waste pickers”. Additionally they train Indonesian street children in becoming skilled furniture makers to produce their designs, providing them with the Vocational training and professional coaching to assist them out of poverty. Beyond the vocational training these youth are taught skills to work in a commercial environment along with social and entrepreneurial skill development training (Ffrash 2015).

The majority of FFrash’s designs are produced from 100% trash and their goal is to use 100% recycled materials where possible. Some of the recycled materials used include plastic bottle lids and recycled timber which are turned into side tables and clocks, as well as discarded light bulbs from fishing boats which are transformed into vases (Ffrash 2015). 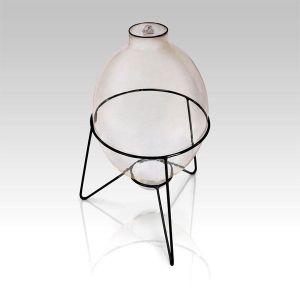 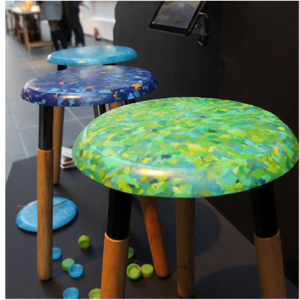 All revenue is reinvested into the care and development of Ffrash artisans and street children. Praise should be given to initiative such as Ffrash that are not only contributing to reducing waste and addressing environmental issues, but also to their efforts to address social and economic issues.