Recognised as one of Indonesia’s art hubs, Yogyakarta is home to over fifty art and cultural spaces (Bruhn 2015). With photography and film collectives, experimental music spaces, cultural studies centres and more, it is not difficult for artists (established or aspiring) to explore and find their ‘niche’ within this city. Alongside commercial success, these artists have the freedom to challenge authority in public spaces, but more importantly have the agency to create a gateway for social change.

“Working collectively in alternative spaces breeds a more organic understanding and attachment to a politics that challenges both capitalist and state orthodoxy” (Abbot, cited in Bruhn 2015).

However, it wasn’t always this way.

The DIY culture surrounding the art communities of Yogyakarta only arose from the 1990s amongst activists, sub-cultures and artists. In particular, a cultural activist organisation named Taring Padi was formed there in 1998 when the former president was overthrown by the student and people’s movement. Taring Padi fought for open democratic spaces in society, allowing art to be used as a tool for political expression and education for all (Taring Padi n.d.). To achieve this, they used live music as ‘artistic camouflage’ to spread their message and communicated to the people through big banners, performance art and their punk and rock ‘n’ roll lyrics (Indonesia Art Activism and Rock ‘n’ Roll 2002).

As a cultural movement, ‘everything that we voice, all the yells that we holler we use a different form, that’s art’ (Indonesia Art Activism and Rock ‘n’ Roll 2002).

However, many tobacco companies are feeding into the arts scene, using tactics that allow themselves to be heavily rooted into Indonesian and Javanese youth and activist culture. The Indonesian tobacco company Sampoerna has linked itself as a sponsor to the concert series SoundrenAline.

Its marketing activities have expanded into social media to influence the youth to associate smoking with music, creativity and self-expression. A clear example of this is their ‘Go Ahead Challenge’ which encouraged people to get involved in designing a limited edition A Mild cigarette package (Astuti, Assunta & Freeman 2018). The winner was a young Indonesian artist and his design features a red finger print, with the words ‘Go Ahead, be yourself & be brave!’ lining the interior packaging. This ‘creativity’ and ‘empowerment’ message was shared at the concert, along with the new limited-edition cigarette pack, and more than 65,000 Instagram posts marked with the A brand marketing hashtags were found (Astuti & Freeman 2018). 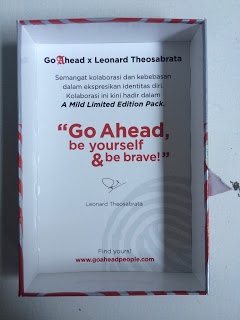 Considering the roots of design activism in Indonesia, and how it arose as an art movement for the people, this exploitation of idealised notions of creativity by the tobacco industry is far from fair. Thus, while it may be difficult to get governments to play a more dominant role in restricting tobacco advertising and sponsorship by enforcing already existing regulation, artists and creatives can utilise their practice and engagement with local communities to confront these contemporary concerns.

An interview with Luqman, a 42 year old becak driver in Yogyakarta provides insight into his personal experience with smoking. Aged 14 and eager to follow in his father’s footsteps, he was deeply curious about the ‘relaxing’ and ‘stress-relieving’ effects of smoking. It is known that increasing age, and the influence of friends, sibling and a father who smokes were found to constitute risk factors in habitual smoking (Skulberg, Hamid & Vaktskjold 2019), and this proved true in Luqman’s case. And although it is hardly fair that millions of children are suffering from malnutrition, millions of Indonesian fathers are choosing to spend more money on cigarettes than on meat, eggs or milk for their children (Sumartono et al. 2011).

Ironically, his father forbid him from smoking. But with his pocket money, he secretly purchased a cheap brand of cigarettes to try. Once employed, he transitioned to a more expensive brand for its ‘good taste’ and also increased the quantity he smoked daily “from half a pack, to one pack, two pack and then three pack a day”, with one pack containing a total of 16 cigarettes. This sharp increase in smoking in Indonesia is argued to be the direct consequence of the decision to open the Indonesian tobacco industry to foreign investors during the 1990s economic liberalisation (Hurt et al. 2012). With more than 1,000 cigarette companies based in Indonesia (Prabandari & Dewi 2016), the domination of the tobacco industry limits the country’s ability to control the advertisement and sale of cigarettes.

But it was only 5 years ago that Luqman stopped smoking due to health issues such as eye irritation and respiratory problems. He immediately thought of smoking to be the culprit and finished his remaining cigarettes that day, to dramatically reduce his intake the next morning. I questioned whether he still smokes at social gatherings if there are other smokers present, as in advertisements, smoking is portrayed not only as socially encouraged for young men, but also part of the enjoyment of being young and establishing one’s masculine identity (Nichter et al. 2009). He replied yes, but he is no longer accustomed to the bitter taste so his body reacts negatively by vomiting. The fact that he still partakes in smoking to ‘socialise’ is a clear case of the tobacco industry reading, reproducing and working with Indonesian culture as a means of selling cigarettes.

Approximately one third of the world’s population partakes in smoking, with the top 3 countries being China, India and Indonesia. Surveys have shown that 62% of men and 1-3% of women are smokers nationwide (Nichter et al. 2009) and this high number is often the cause of highly aggressive advertisements from tobacco companies targeting Indonesia. The Government of Republic of Indonesia is one of the few countries who have still not sanctioned the Framework Convention on Tobacco Control (FCTC) despite encouragement from the World Health Organisation (WHO) (Sumartono et al. 2011). The government reaps the economic benefits from the selling of cigarettes so there is little incentive for them to discourage tobacco use (Ganiwijaya 1995), thus the lack of tobacco regulation at a national level. Therefore, as a highly diverse country made up of many cultures and subcultures, further research into specific areas is required to tackle the tobacco issues and its stems.

A tobacco cessation initiative called Project QTI has been working on developing messages which denormalise a smoking society. This initiative is concentrated in Java, a politically and economically dominant island of Indonesia containing more than half of the nation’s population. In a cross-sectional study of 15 to 17-year-old students in Java, 55.6% of the male students were current smokers (Skulberg, Hamid & Vaktskjold 2019). The study has found that the probability of active smokers was 7.4 times higher in public rural schools than public schools in town (Skulberg, Hamid & Vaktskjold 2019).

In group discussions conducted with 50 teenage boys in the Purworejo District in Central Java, representing rural villages and urban settlements, the non-smokers perceived there to be few smokers around them, whilst the smokers felt that ‘everybody smokes’ (Ng, Weinehall & Ohman 2008). Moreover, tobacco was tied into their traditional ceremonies and gifted during such events. They were also smoked during social gatherings – and this is a case of the tobacco industry reading and working with Javanese culture as a means to sell cigarettes.

The boys used words such as ‘a steady life’, ‘pleasure’, ‘good taste’, ‘feel so rich’ and ‘impressive’ to describe smoking. Also, depending on the cigarette brand, they felt that they could increase their social status to feel more confident, mature and richer amongst their peers (Ng, Weinehall & Ohman 2008). This focus on popularity is in contrast to adult males, who often rely on cigarettes to demonstrate responsibility and willpower (Nichter et al. 2009).

Going back to Project QTI, the anti-tobacco intervention, Javanese ideals of strength and moral identity are tapped into, to encourage men to have the strength to part with the harmful habit of smoking. This is most similar to Ramadan, in which one challenges oneself to control desires such as hunger, thirst and sleep. These cases demonstrate the importance of gender-specific intervention when it comes to tobacco regulation. A relatively young population compounded by the high prevalence of smoking among males (Sumartono et al. 2011) provides further reason for Indonesia to avoid economic health care consequences by ratifying the FCTC to implement measures for a smoke-free society as the norm.

Far too many men, especially those of working age, are losing their lives to an ever-expanding public health problem – suicide. As the single biggest cause of death for men under the age of 45 (Schumacher 2019), it is the often a lack of willingness to acknowledge their own mental health (Moller-Leimkuhler, 2002) in conjunction with the ideals of rugged individualism which results in social fragmentation and fewer coping alternatives (Spencer-Thomas, Hindman & Conrad 2012).

Man Therapy is a suicide prevention campaign targeting working-aged men which arose as the result of a non-profit partnership between Cactus, a Denver-based advertising agency, the Office of Suicide Prevention and the Carson J Spencer Foundation, a suicide prevention non-profit organisation. The transdisciplinary design initiative utilises a top-down approach in which the first five years of the project was dedicated to research from 8 focus groups and in-depth interviews (Spencer-Thomas, Hindman & Conrad 2014). Their multi-channel campaign which was rolled out in 2012 lends itself to television, radio, social media, print media and billboards in order to encourage men to visit their interactive website, http://www.mantherapy.org. There, they can interact with the fictitious Dr. Rich Mahogany to learn more about men’s mental health, partake in a ‘head inspection’ (self-assessment) and browse custom tools and resources designed to lead them to recovery.

Man Therapy takes on a bold stance, playing on typical notions of masculinity and dark humour to bridge to new ideas that destigmatise mental health. Thus, the program was quickly expanded from a suicide prevention initiative to a men’s mental health campaign to reshape the conversation around issues such as depression, divorce, violence, stress and substance abuse.

For most, the ‘manspeak’ and humour resonated with them and allowed them to rethink their mental health as ‘the last place that a person struggling wants to go is a ‘sterile’ site that sucks out that last bit of dignity’ (Spencer-Thomas, Hindman & Conrad 2014). Some thought the campaign was problematic in that it was too light of an approach to a grim issue and argued that a bit of humour was effective in dealing with this area but a whole website was overboard. However, the campaign was a success as the pop-up survey found that 83% would recommend to a friend in need and that the average time spent on the site was 5-7 minutes (Spencer-Thomas, Hindman & Conrad 2014), which suggests most are taking their time to explore the resources there.

In Indonesia, 66.6% of males use tobacco daily (The Tobacco Atlas 2015) and from this Man Therapy case study, it is evident that targeting a very specific sub-population of men can be highly effective. Placing advertisements where men often frequented (bars, bathrooms, sporting events, etc.) created awareness and thereby drew visitors to the website where behaviour and attitude change could then take place.

In the FCTC, the first guiding principle is that people ‘should be informed of the health consequences, addictive nature and mortal threat posed by tobacco consumption’ (World Health Organization 2009), and a website like Man Therapy could be highly successful in accomplishing this. Thus in this case, a light approach to a grim issue, but still with the right amount of sensitivity could prove helpful in drawing attention to the issues behind tobacco consumption.